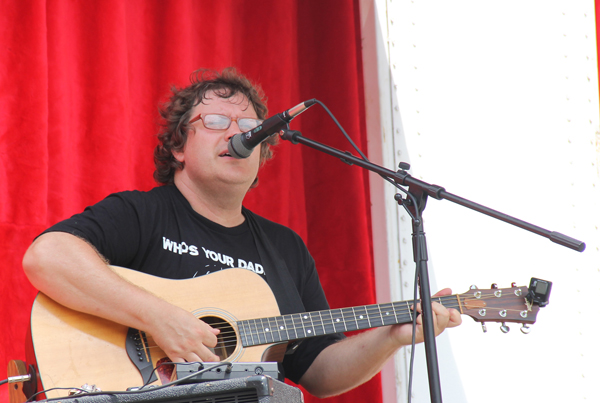 Craft vendors, local residents, musicians and others came together for a new event in Albert Lea on Wednesday. 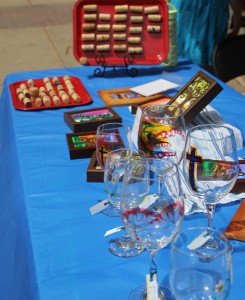 Local teachers Raissa Byer, Krystal Falk and Robin Brown had a vendor booth at Wind Down Wednesday featuring painted glasses and other crafts.

The first Wind Down Wednesday took place in downtown Albert Lea from 11 a.m. to 8 p.m. Wednesday. Though there was a rain delay mid-afternoon and later around 5 p.m., the event started up again. It included an outdoor market, drinks, live entertainment and arts and crafts vendors. One of those vendors was local teacher Jane Bute, whose craft is customizing decorative blocks.

Bute customizes wooden blocks with photos, letters and other accents and can even personalize them to spell out a name or for special gifts. She had a booth set up at the event near other local teachers, Robin Brown, Raissa Byer and Krystal Falk, who sell a variety of items.

“It’s been really fun to be part of the first Wind Down Wednesday,” Byer said. “We hope to keep seeing more traffic as the day goes on.”

Albert Lea resident Diane Landaas was at the event checking out the vendors on her lunch break and said she was glad to see an event like this in Albert Lea.

“It just sounded so interesting,” Landaas said. “I love things like this.” 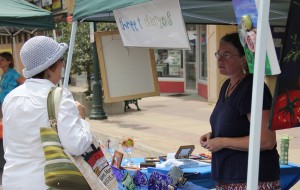 “They helped us so much,” Petersen said.

The arts and craft vendors at the festival had items including jewelry, wood carvings, glass, custom paintings, photography, handmade essential oil products, pottery, body art and sun catchers, among others.

Almost a dozen food vendors were there selling everything from beverages and snow cones to burgers, tacos and chicken wings. 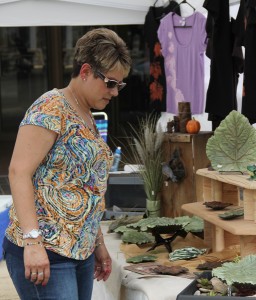 Vicki Manges looks at a vendor’s items at the Wind Down Wednesday event in downtown Albert Lea Wednesday.

The Albert Lea City Council in May authorized alcohol to be served outdoors within the blocked off portion of the street. People drinking alcoholic beverages were given a cup with the Wind Down Wednesday logo on it to use.

Entertainment was on two stages, the main one was between the Albert Lea Convention and Visitors Bureau and the Alliant Energy building, and an acoustic stage was between the Freeborn National Bank building and the Shoff Chiropractic building.

The Albert Lea Farmers Market was in its regular location in the North Broadway parking lot from 4 to 6 p.m.

The second Wind Down Wednesday is scheduled for Aug. 15. Petersen said she expects many of the same vendors will return and hopes they’ll have a few more sign up as well. She said she had only heard positive comments about the event.

“It went so well,” Petersen said. “We’re looking forward to next month.”