They say a well-designed hole produces a variety of scores and makes or breaks a player’s round. The fourth hole does just that for rounds at Oak View Golf Course south of Freeborn. 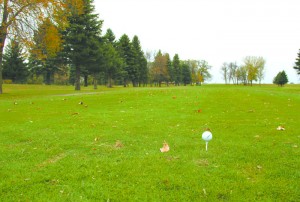 The par-4 slight dogleg to the left requires golfers to hit it straight and long or else attempt an always-difficult draw. Freeborn County Road 8 aligns the right side, marking an out of bounds. And there is a water hazard across the fairway about where drives land at 185 yards. Trees stand just beyond on the right and left sides.

He said if a player accidentally slices or fades,the ball could be on or over the road. Too much of a hook, trees block the next shot. Too short avoids the water, but it makes for a long approach.

So Johnson tells players the best solution is to hit the ball hard and straight over the water and get the ball as close to the green as possible.

This usually leaves players approaching the green from the right, sometimes beneath a few trees.

A nice chip shot will bring players onto an undulating green. The breaks make putts challenging.

It is a spectator-friendly fourth hole that returns to the clubhouse, but it used to be the ninth before a course redesign in the 1970s. Johnson also likes that the south-to-north fairway is the most-sheltered on the course from wild western winds; however, it is exposed to the southern or southwestern wind, which can push the ball along.

This is the third of a seven-part series featuring the best golf holes in southern Minnesota.