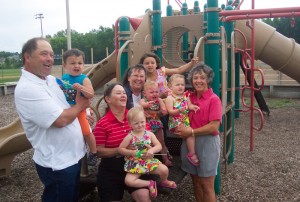 The Broskoff quadruplets from Geneva recently met with the Seifert quadruplets from Sleepy Eye. The Broskoff quadruplets are the youngest quadruplets in the state, and the Sieffert quadruplets are the oldest. Even though there is a 60-year age difference, they had a lot in common. Both sets are made up of three girls and one boy, both were premature when they were born, weighing from 2 pounds 6 ounces to 4 pounds, and both were labeled ABCD. The Broskoff quads will be 2 in September. Pictured are Mike Seifert of Sleepy Eye holding Shay Broskoff, Monica Clayton of Colorado Springs holding Lia Broskoff, Marie Hoffmann of Worthington holding Hattie Broskoff, and Martha Andersen of Albert Lea holding Reagan Broskoff. In back is older sister Presley Broskoff. -- Submitted