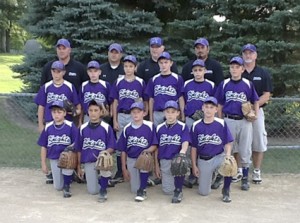 The first and only junior Knights team that played five years ago was the beginning of this year’s Albert Lea Knights 11AAA team. Four players from this year’s 11AAA team started with the junior Knights playing small local area teams in coach pitchgames like Glenville, Alden, Maple Island and Freeborn, gaining more teammates along the way.

So far, the core of the team has played in four state tournaments. Their success has placed them in the Albert Lea Knights baseball Hall of Fame three years in a row now.

This year this team played at the Triple A level. Triple A is the highest level of baseball in the state of Minnesota for traveling youth.

“It is very competitive and it is the best of the best,” coach Tom Sorenson said.

Coach John Ball said what separated the team and players among many other players and teams is their focus.

“At 11 years old to have a team go through seven games at a state tournament and not lose focus for one inning is unheard of,” Ball said.

Sorenson said when it comes to tryouts and picking players for the Knights team the coaches are looking for a player who is coachable, focused, has a good arm, can play defense and run bases. 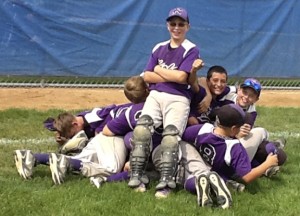 Members of the Knights 11AAA baseball team pile on top of each other after placing third in the state tournament.

“Hitting is important, but not as important that some parents think it is,” Sorenson said. “Baseball has so many variables to what makes a good player or better player. Also included in those variables is he or she a good kid? We want mature, well rounded kids that won’t cause issues behind the scenes.”

Other coaches on the 11AAA team include Randy Andersen, Dave Goodell, and Jessie Hernandez Sr.

Andersen said what makes a successful team is the help that the team parents do.

“Every parent has a team duty. Anything from being the team tent manager, hotel organizer, setting up team parties, taking charge of first aid kit,” Andersen said. “We are so blessed to have great parents on the 11AAA team. I could not think of it being any better. Our parents do not yell at the umpire, their players or anyone else. They sit back and let the coaches coach and yell positive reinforcement.”

This team really pulls for each other Coach Dave Goodell said. Goodell’s son Carson is on the team.

Goodell said the kids are truly happy for their teammate’s success.

“Many kids at this age could think only abou themselves and their success and put that before their team’s success. Not these boys,” Goodell said. “These kids already understand the team concept. They could already have big egos with their success, but they are truly a bunch of kids that like each other and wish their teammates the most success.”

When they’re off the field, the teammates still spend a lot of time together. They have team sleepovers, go over to each other’s houses and play on other traveling leagues together. They also play whiffle ball, baseball, fish, and go to Twins games.

Members of the Knights 11AAA baseball team pile on top of each other after placing third in the state tournament.

“I think they all probably have video games, but when these boys are together in the summer they are outside playing something,” Ball said. “These are active boys and being inside playing video games just isn’t in their makeup.”

Next year the 11AAA team will compete at the 12AAA level in Minnesota, and they’re looking to create more success and history.