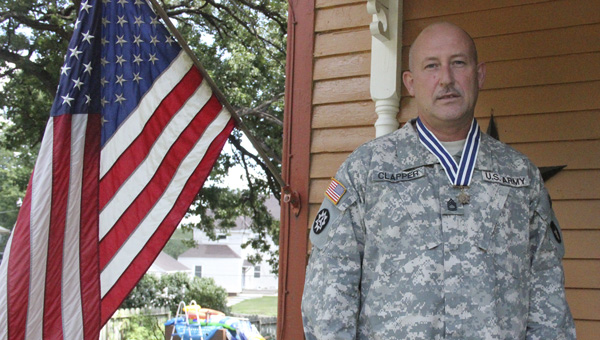 A local soldier was awarded the Medal of Valor for helping save his neighbors from a house fire.

Sgt. 1st Class Kevin Clapper was awarded the medal by his brigade commander Col. Eric Kerska at a ceremony on July 29. He, his family and other neighbors all helped Kristopher Schewe and Beth Sackson escape from a house fire next door to the Clapper’s house. 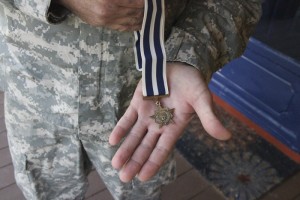 Kevin Clapper holds the Medal of Valor he recently received.

“It was a lot of effort from family and neighbors,” Clapper said.

Clapper’s son, Alex, awoke when he saw the flames on April 12, 2011. Though they called the fire department immediately, they saw that the fire was so large already that they would need to do something. Clapper said he and his daughter, Amber, grabbed a ladder to break out the window of the couple’s bedroom.

“My whole thought process was ‘I don’t want them to die,’” Clapper said.

They were able to get the couple out the window with injuries of just smoke inhalation. Clapper said his commander, Chris Andersen, heard about Clapper’s actions and nominated Clapper for the Medal of Valor.

Clapper has been with the Minnesota National Guard for six years, but has a total of 19 years in the Army because he was with a unit in North Carolina. He deployed to the Gulf War in 1992, and ended his career at the rank of E-5.

He re-enlisted in 2006 when his daughter, Amber, had decided to enlist. He now has the rank of E-7, and he has deployed to both Kosovo and Kuwait. Clapper is a sergeant first class with the Headquarters Company, out of Mankato, of the 2nd Battalion, 135th Infantry Regiment within the 34th “Red Bull” Division of the Minnesota National Guard. He said his recent deployments to Kosovo and Kuwait were much different than his tour in the early 90s.

“You were living with limited resources,” Clapper said.

He said in some ways soldiers today are a little spoiled, but he acknowledged that there are many good soldiers who are good leaders. Learning about leadership is one of Clapper’s favorite things about being in the Army. One of his favorite things is working with new soldiers since he’s a platoon sergeant.

Now that he’s returned from deployment he’s looking for a full-time job. He’s previously worked in maintenance and sanitation at several food processors.

In his spare time Clapper enjoys hiking, fishing, exercising, working on his home and spending time with family.

Kevin Clapper
Age: 50
Address: 320 Vine Ave., Albert Lea
Family: wife, Tina, three daughters, Amber, Abbie-Rae and Angelica, one son, Alex, niece LaTasha, and seven grandchildren
Livelihood: Sergeant first class with the Headquarters Company of the 2nd Battalion, 135th Infantry Regiment within the 34th “Red Bull” Division of the Minnesota National Guard
Interesting fact: Kevin re-enlisted in the Army with his daughter, Amber, was she was considering it back in 2006.