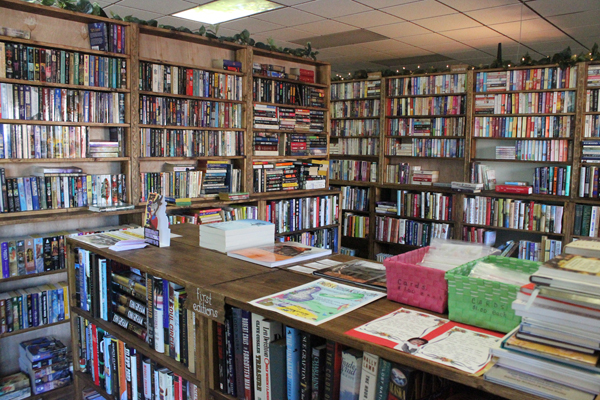 A Bit Bookish opened in Clarks Grove in November. Part-owner Kim Hammer said it had always been her dream to open a used book store. --Kelli Lageson/Albert Lea Tribune

CLARKS GROVE — With Amazon, Barnes & Noble and other major booksellers increasing their online presence through electronic tablets and e-readers, bookstores opening up are not common. But there is a new one in this town.

A Bit Bookish opened its doors last November on Main Street. The store sells used books and the products of local artisans.

“I had it in my mind that someday I would open up a used bookstore,” Kim Hammer, part-owner of the store, said.

That day came last spring when the owner of the old bank building in Clarks Grove expressed an interest in renting the bottom half of the building. Hammer and her mother, Crystal, starting spreading the word and advertising their need for used books to sell last spring. According to Hammer, there was a good response from people in Austin.

Then in the summer of 2011 they started the process of cleaning out the building, painting and tiling to make the store ready for customers.

The day after Thanksgiving the store opened its doors. Hammer said that after The Constant Reader bookstore in Albert Lea closed in December 2006 people were looking for a place to buy and sell used books. The customers bring books into A Bit Bookish in exchange for store credit.

Local artisans sell their products at the store, too. The store doesn’t receive any profit from the sales of the products. Hammer said that it helps each of the businesses draw more customers in.

“We have a one person helping another kind of relationship,” Hammer said.

Prairie Essence sells all natural beauty products like lotion, shampoo and anti-aging cream at the store. Judy Olson, a two-time cancer survivor, makes her own cards from the cards that people sent her during her treatments and sells them for $1 there.

Sandra H. Esch’s book “Tracks in the Snow” is sold at the store. Esch is from Albert Lea but resides in southern California. Esch’s sister has Parkinson’s disease and the sales from the book go to toward helping people with Parkinson’s disease.

A Bit Bookish offers stuffed chairs and a fireplace in the reading area. If a customer stays long enough, Kim or Crystal will serve them a beverage and a treat.

People can come in and read newspapers in the morning because the store has a subscription to The New York Times and other local newspapers.

“They can make themselves at home,” Hammer said.

Like most bookstores, there is a kids section in the store. The kids corner is filled with books and a large stuffed caterpillar for them to lay on while they read.

This fall A Bit Bookish plans to assemble book clubs. Hammer said that they can do any genre people are interested in and intend to discuss the books once a week at the store.

The name of the store describes it well. “A bit bookish” is a term people used to use to describe someone who is kind of a bookworm, on the quiet side or intellectual.

“It might not be something the average person would get,” Hammer said.

She is fond of the phrase and thought it would suit the store.