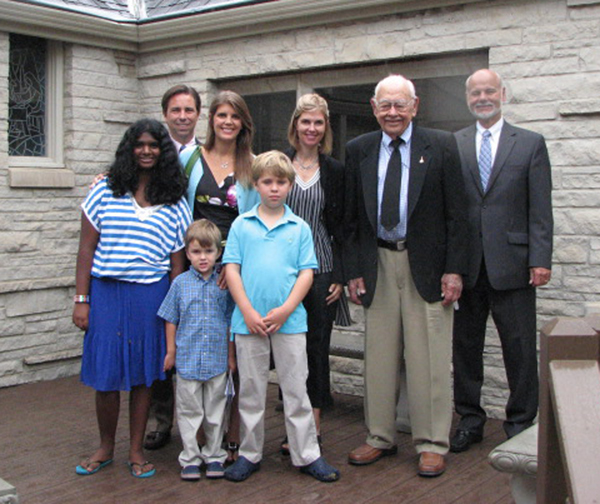 In the front row are great-grandchildren Sophie Judge, Jack and Teddy Prisendorf. In the back row are grandson-in-law Justin Prisendorf, granddaughters Mary Prisendorf and Julie Morrison, MT Morrison and son, Mike Morrison. -- Submitted

On July 29, Christ Episcopal Church dedicated the Morrison Meditation Courtyard, in honor of a long-standing member of its church community MT Morrison, and his late wife, June. 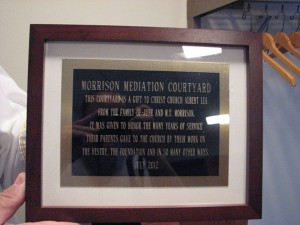 The plaque for the Morrison Meditation Courtyard.

A charitable gift was given to the church by Morrison’s family in honor of his 100th birthday. He wanted something to add to the beauty and elegance of a church he has been a part for many years. He has since turned 101.

The courtyard, which is located at the front right of the church entrance, had been the home of a misplaced spruce tree. Once it was removed two years ago, the space lacked a certain personality. After some time contemplating what to do with the space, Junior Warden Paul Johanson collaborated with Frank Maras Construction and put together a plan for an area that would truly embody the church’s spirit: a place of peace for people to congregate, reflect and relax. The new courtyard accentuates the church with the addition of Episcopalian crosses in the wood railings. The labyrinth in the back of the church feeds on that spirit as does the weekly yoga classes held by Clemencia Gujral at the church each Monday.

The new meditation space compliments the warmth that the church embodies. The church is grateful to be able to honor Morrison, who has long and strong ties to Albert Lea and Christ Episcopal by giving a wonderful space for people to gather.