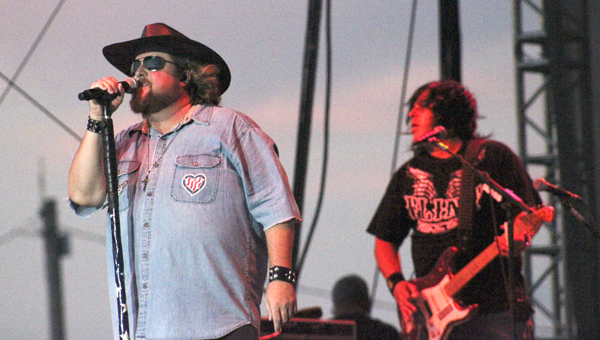 Colt Ford sings “Mr. Good Time.” Ford is a country rap artist and was the first to perform in the Grandstand at the 2012 Freeborn County Fair. -- Colleen Thompson/Albert Lea Tribune

With an honor guard marching while the Grandstand crowd recited the Pledge of Allegiance and an American flag cutout on stage the background, country rapper Colt Ford took the stage. 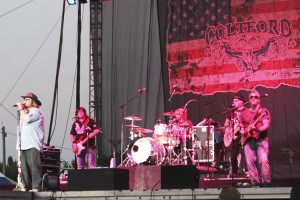 Colt Ford and his band performing “Riding Through the Country.” The song was written in honor of military personnel, police officers and firefighters.

Ford and his five band mates opened with the song “Answer To No One,” and with that the band captured the audience’s attention.

“Even though it’s a Tuesday night, we’re gonna have fun!” Ford told the crowd.

The stage was illuminated with a combination of red, white and blue lights. Even the microphone had tape around it with those same colors. Ford made it clear from the very start how patriotic he was, and his songs reflected that very fact.

“I believe in God, family, friends, America and hard work,” Ford told the crowd. “If people don’t believe that they can get on a plane and just leave.” 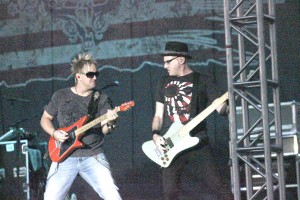 It is guitarist versus bassist. Several times throughout the show the instrumentalists performed duets and solos.

The crowd loved his speech and cheered even louder when the band started playing “Riding Through The Country.” Ford wrote that song in honor of military members, police officers, firefighters and others in careers of public service.

Whether you were a longtime fan or a curious fairgoer, the lyrics in the 10th song of the evening, “Back,” were unmistakable:

“Yeah, it’s the same ol’, same ol’.  Nothin’s changed where everybody knows your name. It’s a dirt road trip down memory lane, an ol’ flame I can’t get past. It’s every reason that I lived and every reason I go back.”

At several points throughout the show, Ford’s fiddler, hailing from Missouri, played remarkable solos. Sometimes the band members would randomly break out into solos throughout the song sets. The bass player successfully made my heart pound in my chest with every pluck he made. Ford, the bassist, the fiddler and two guitarists frequently moved about the stage and stomped their feet to the beat of the music. At one point, the drummer and Ford switched places. The drummer led the audience in the classic song by Bon Jovi, “Livin’ On A Prayer.”

Ford, with his sunglasses on throughout the entire show, joked with the crowd between songs.

“According to Country Magazine, I’m the ninth sexiest country singer,” he said. “That’s pretty good for a 300-pound guy.”

Although the high-energy show had upbeat, fun-loving and patriotic songs, it crossed into other areas of the music spectrum as well.

“I’m gonna play ya’ll a love song. Well, my version of a love song,” he said.

“Chicken and Biscuits.” The title pretty much says it all.

“She’s pretty as a field of daisies, hotter than the Alabama asphalt,” said the chorus of one of Ford’s most well-known songs.

The crowd went wild for some of the more famous songs: “All In,” “Skirts and Boots,” “Lucky,” “This Is Our Song,” “Mud Digger” and “No Trash In My Trailer.” The tunes had some crowd members dancing in the aisles, pumping their fists and clapping their hands.

Ford and his band played other songs that they can’t claim as their own, but the crowd still went wild for. “Sexy and I Know It” and “Sweet Home Alabama” were some of the songs Ford sang in his country rap style.

The band tried to wrap up the show with “Sweet Home Alabama,” but the crowd demanded more. The band came back out and gave the crowd what it wanted with “Cold Beer” as their final song.

The 20-song concert lasted for an hour and a half and served as a great kickoff to the Six Best Days of Summer.