Two of the four distinguished alumni for 2012 are Earl Jacobsen and Dale Hanson, who will be honored at the Pathways to Success Banquet on Sept. 13 at Wedgewood Cove Golf Club.

The Education Foundation of Albert Lea each year selects graduates of Albert Lea High School to be honored as distinguished alumni.

Selections are made from nominations; the nomination form is available on the foundation’s website at www.efal-us.org.

Tickets may be purchased for the banquet by reservation via the foundation. Information and costs are available on the Pathways webpage at http://www.efal-us.org/Events.htm.

The banquet will be preceded by a public forum at 3 p.m. featuring these and other honorees discussing education. The moderator will be a former distinguished alumni, Dr. Don Draayer. 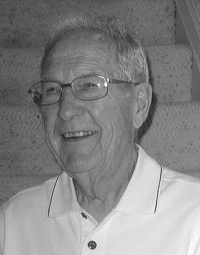 Earl D. Jacobsen was born Nov. 8, 1924, in Albert Lea to Carl and Minnie (Engen) Jacobsen, and was raised in Albert Lea along with his brother Stanley. His parents both worked at Lakeshore Greenhouse.  Earl attended school at Northside Elementary through sixth grade, moved to Central Junior High in seventh grade, and then to Albert Lea High School for grades 10 through 12. In high school he participated in Hi-Y, B.A.A., Discussion Club, Radio Club, and drama. He was an athlete, enjoying football, hockey and track, and later played football while in the Army.

After high school graduation in 1942, Earl attended Albert Lea Junior College in its pre-engineering program during 1942-43. Earl interrupted his college education to serve in the United States Army from June 1943 until his discharge in February 1946. He pursued engineering basic training in Army colleges in Oregon, California and Texas before serving in the European Theater of Operation with the 12th Armored Division. His assignments included infantryman and tank commander. Earl was wounded in France and spent three months in a hospital in England.

Following his Army discharge, Earl went to the University of Minnesota, earning a degree in law in 1948 and in 1950  added an education degree with an industrial arts focus. He would earn his master’s degree in vocational education in 1957.

Earl’s first teaching position was in Benton Harbor, Mich., during the 1950-51 school year.  However, the hometown beckoned, and he returned to Albert Lea to begin his 35 years of service to students at Albert Lea High School.  Within the industrial arts department he taught general industrial arts, woodworking, metals, electricity, drafting, engineering, architectural drawing and vocational training.

Clubs were popular so when VICA — Vocational Industrial Clubs of America — became an option, Earl became the club advisor. He led his student competitors to winning slots at the Minnesota state competitions for 17 years. He was proud to have two of his students take first place at national VICA competitions during that time.

Earl spent several summers working for the city recreation department supervising programs at city parks. He also enjoyed being a part-time real estate salesman during the 1950s and ’60s.  From 1966 through 1972 Earl was on staff at Camp Courage, which is affiliated with the Minnesota Society for Crippled Children and Adults. At Camp Courage Earl supervised craft shops and woodworking, lapidary and ceramics labs.

In 1948 Earl married Alyce “Penny” Doyscher.  They raised two sons in Albert Lea, both also graduating from Albert Lea High School. Carl lives in Green Bay, Wis., where he is a tool and die designer. He is married to Ann and they have two daughters – Ayla, 20, is a US Marine, currently stationed in Twenty Nine Palms, Calif., and Hunter, almost 18, plans to join the Navy this fall. Glen and his wife, Donna, live in rural Renville County where Glen is the assistant county attorney. They are active in state and national herpetological organizations.

Earl has been active in service to young people in his local community.  He was an Ambassador for Camp Courage for the United Way. From 1987 until 2000 he served as a Guardian ad Litem for the Freeborn County Court system. While his sons were growing up he was a leader in Cub Scout Pack 7 and Boy Scout Troop 5. Earl earned his Eagle Scout Award in 1939; Carl earned his in 1973; and Glen in 1975. Troop 5 was well known for its many Eagle Scouts.

Earl has been an active member of the Albert Lea Rotary Club since 1974. He was the club president in 1987-88 and has held positions as secretary, vice president, and currently serves as a club director. He has a special interest is Rotary International’s Polio Plus program.

In addition to work with local youth, Earl has been a long-time volunteer with the local Ecumenical Food Pantry, Freeborn County Habitat for Humanity and the Salvation Army.  He has also helped with the local Meals-on-the-Go program.  He has been a member of First Presbyterian Church since 1948.  Earl — Jake to most of his friends — is presently very active in two daily coffee groups. 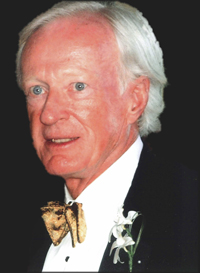 Dale Sven Hanson was born Nov. 10, 1938, in Milwaukee, to Yngve and Evelyn Hanson.  He and his parents moved to Albert Lea in 1946.  He attended elementary school at Southside Elementary along with Jerry Tostrud and Manny Steil. During his three years at Albert Lea High School, Dale was active in varsity football and golf, participated in “Tiger’s Roar” variety show and was business manager with Kay Hill for both the Ahlahasa newspaper and Tiger yearbook. He was also a basketball manager and in intramurals. Dale graduated from Albert Lea High School in June 1956. He studied at Carleton College in Northfield, earning his Bachelor of Arts in 1960 in economics.

Dale’s first job came right after graduation from college. He worked for General Electric Co. from July 1960 to August 1962. While there he participated in its financial management training program.

From General Electric, he went to work for First National Bank of St. Paul in August 1962, where he eventually became president and director of First National St. Paul. He was also an executive vice president of First Bank System, the parent holding company of First St. Paul, in February 1984.

After six years in that position, Dale became a director of C. H. Robinson Worldwide Inc. in Eden Prairie, in 1988. In 1990 he joined CHRW full time as vice president finance and continued as a director, retiring in 2000.

Dale remained connected to Albert Lea, serving on the boards of Edwards Manufacturing Co. Inc. and Fountain Industries Inc. He also served on the board of W.A. Lang, Co. of St. Paul.

Shortly after college, Dale married Joan Benton, also a Carleton graduate, in July 1961.  They had two sons.  Tom, a lawyer working in Portland, Maine, and his wife Beth have three children.  Beth is a psychologist practicing in Portland.  Tim is a doctor specializing in anesthesiology; his practice is in Newport Beach, CA.  He is married to Mimi and they have two children.

Following a divorce in 2004, Dale married Elizabeth (Libby) Dickinson, a Duke University graduate, in 2006.  In that marriage Dale gained a step-daughter, Debbi Kelly, who with her husband John have two children and live in Alexandria, VA.  Debbie is a consultant for the women’s fashion industry; John is a lobbyist with Cornerstone Government Affairs in Washington, D.C.

Today Dale and Libby have residences in Sanibel Island, Florida, St. Paul, Minnesota, Bay Harbor, Michigan, and Bloomfield Hills, Michigan.  Dale’s community activities included being a board member and president of Somerset Country Club in St. Paul.  He is also a member of the Sanctuary Country Club in Sanibel Island, FL, and the Captiva Island Yacht Club, Captiva, FL, where he served on the board and was Commodore.  In northern Michigan, Dale and Libby are members of the Walloon Lake Country Club and the Bay Harbor Yacht Club.

Ten years ago Dale initiated an ethics program at his alma mater, Carleton College.  The objective of this program, now called “EthiC,” (Ethic Inquiry at Carleton), is to “provide Carleton students with the resources to address the ethical challenges they will face in life.”  Dale and Libby are especially pleased that they can contribute to the future successes of ALHS students with their endowment of a fund to provide scholarships for students majoring in religion or economics.

Dale keeps busy today with his many sports activities including sailing and power boating, skiing, fly fishing, cycling, golf, and motor sports.  He and his wife also enjoy touring the USA and Canada in their motor coach.  He is still an avid reader, enjoying biographies and history but also as he says, a junkie for politics and financial markets.

Dale has one brother, Kim.  He and his wife, Alice Demo Hanson, both graduated from Albert Lea High School also, in 1965.

Reflecting on his life journey so far, Dale identified several personal accomplishments, which he credited to lots of help from God, family, friends, and special mentors including from ALHS Edna Gercken, journalism teacher, and Earl Jacobsen, industrial arts teacher.  Dale said he was the first member of his family history to attend and graduate from college.  He has had enjoyable, interesting, challenging, and rewarding careers and contributed energies to his communities.  But most of all Dale sees his special joys related to friends and family – raising his children, having a wonderful marriage to Elizabeth (Libby) D. Hanson, and participating in a wonderful, special relationship with their adult children and grandchildren.