From tree to Twin 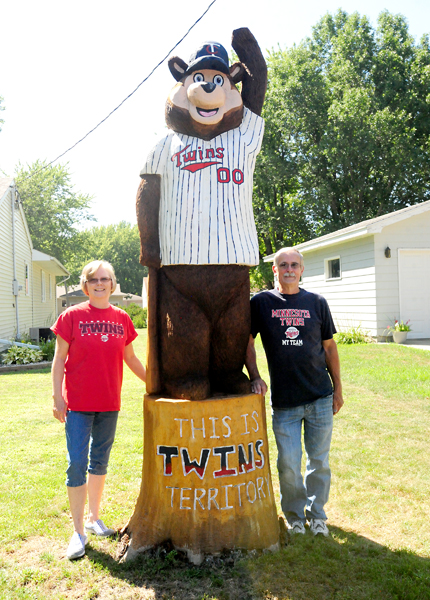 Tom and Sandy Schroeder stand with the TC bear they had carved into a walnut tree in their front yard beginning on July 18. The statue was finished on July 21. — Brandi Hagen/Albert Lea Tribune

WELLS — What once stood as a 70-foot nuissance has become a 12-foot Twins baseball icon in the front yard of a Wells couple.

Tom and Sandy Schroeder, die-hard Twins fans, decided that after 30-plus years of trimming back a walnut tree so a utility company could do its job, something needed to be done.

The tree was trimmed to 12-feet last fall and in the meantime the couple had pondered the thought of making something with the remaining tree, but didn’t know what.

After seeing wood carvings by Tracy and Bess Coy at the Wells Gun Trader Show in March, an idea sparked in the couple’s minds to have TC, the Twins mascot, carved into the tree.

After talking with the Coys, who started Coy Custom Carvings as a hobby, the idea became a reality.

With a photo of TC stuck at the top of the tree trunk for inspiration, the husband and wife duo began carving on July 18 and put the final touch of paint on TC on July 21.

Bess said the carving was the couple’s first mascot and said it was a successful project.

“I graduated from Wells so to have my first mascot there is neat,” Bess said.

Bess said the toughest part of working on TC was using scaffolding because it distorts what the bear would look like from the ground level. To overcome the distortion, she said she and her husband spent a lot of time climbing up and down.

Bess said there was a lot of motivation to complete the project, though, because people kept driving by to see the progress, to wave, honk and when it was finished, to stop by wearing Twins jerseys to take pictures with it.

Bess, an art teacher during the school year, said the carving is a good way for her and Tracy to work together in the summer and “blend their worlds” as Tracy is a construction worker.

The Schroeders said they are pretty proud of the work of art in their front yard and can’t wait for their granddaughter to see it.

Sandy said she took more than 75 photos while the bear progressed.

“We hope it pleases people in the community and the kids in town,” Sandy said.

It seemed to please the real TC as Sandy and Tom told him about it in Mankato at a Moondogs game the week before it was to be carved.

“He was trying to dig for a marker in his pocket,” Tom said.

Because TC doesn’t talk, Sandy said he flipped over one of his autographed photos and scribbled an email address on it and showed with his hands that he wanted them to take a picture of it and send it to him.

Now that the statue is completed, the Schroaders have to treat the fur once a year to preserve it, and Sandy has made plans to plant red and white impatiens around it to set it off.

She said friends have even suggested during the winter they put a Twins hat and scarf on the mascot.

For anyone that looks down the road from the United South Central football field, they just might see TC standing at the end waving.