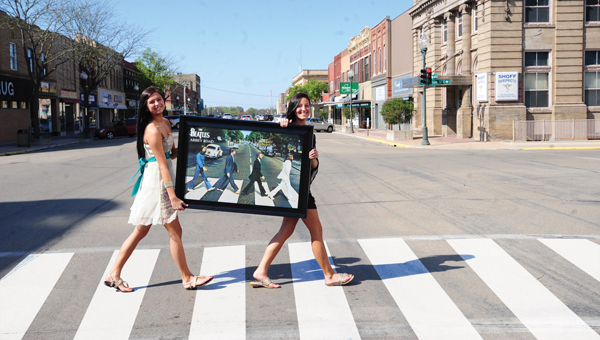 Sisters Erin and Paige Brick have always had an eye for style. With a love for clothing and a talent for creating beautiful outfits, they often have been told they should become personal shoppers. 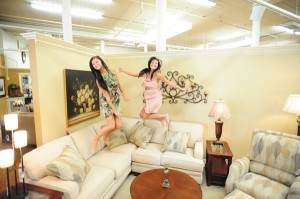 Randi Johnson and Paige Brick jump on the couches at Brick Furniture while modeling clothing available for sale at BG Loft.

Inspired by this and a limited amount of local clothing choices, the girls instead decided to team up with their mother, Kari, in 2009 and open their own clothing boutique, the BG Loft. The shop’s name is short for Brick Girls, located in a loft in the back of their family store, Brick Furniture, in Albert Lea.

Running and working in their own store became a valuable business education for Paige and Erin, now 18 and 20. While Kari handles the bulk of the BG Loft’s management responsibilities, the girls are involved in customer service, ordering product, displaying clothes and bookkeeping.

“I’ve definitely learned how to work with people,” Paige said. And while it’s occasionally difficult to work so closely with family members, the girls have found ways to combine opinions and incorporate everyone’s ideas.

BG Loft strives to offer unique and affordable pieces in limited numbers to give customers a one-of-a-kind style that fits any budget. Clothing items are typically priced under $50 and accessories range from $6 to $20.

Kari describes the fashion trends this season as “very colorful and feminine” with chiffon, linen and lace as the top textures to wear. All the clothes you see on the models are from the BG Loft.

Paige Brick,18, of Albert Lea is part owner in the BG Loft. She is a 2012 graduate of Albert Lea High School and plans on continuing her education this fall with a business major at the University of Minnesota-Duluth. When she’s not working in the store, Paige enjoys golfing, shopping, traveling, hanging out with friends and styling outfits.

Randi Johnson of Albert Lea is also 18 and a 2012 graduate of Albert Lea High School. This fall she plans to attend the University of Arizona and major in special education. A natural at posing for the camera, Randi was actually a professional model as a child. Today, Randi’s hobbies include dancing, traveling, boating and helping out in the special education rooms at school.