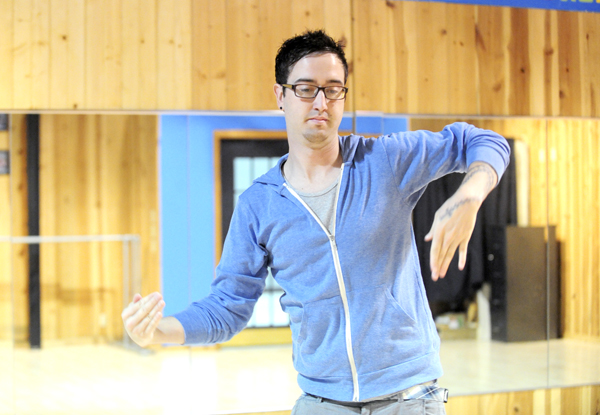 The trip was part of a national youth gathering called ELCA Youth Gathering, and it took place at the end of July. ELCA is the Evangelical Lutheran Church of America.

The leader of Grace’s youth group, 26-year-old Dustin Boyer, had a chance to combine two of his passions in life on the trip: being a Christian youth director and being a hip-hop dancer.

“I never would have thought the two things that I really like to do would have a place for each other in my life, at the same time,” Boyer said.

Boyer was asked by Dave Scherer, a Christian hip-hop artist from Minneapolis, to choreograph pieces for a 35,000 people audience in New Orleans.

Scherer, who goes by Agape on stage, was one of the scheduled performers during the gathering.

In addition to watching Scherer perform his moves, Boyer and three girls from his youth group performed the routine with Scherer at a hotel later in the week.

“It was a good cultural experience,” Boyer said.

Boyer has never taken a formal hip-hop class. He started teaching himself when he was about 18 years old, just by watching other people dance.

“I’m a visual learner,” Boyer said. “I realized, it’s not about doing the perfect moves. There is no perfect way to do anything, it’s just doing what you feel comfortable doing and throwing in confidence.”

Confidence is what it took for Boyer to drive to Milwaukee with a friend when he was 22 to try out for “So You Think You Can Dance.”

He said the whole process took a really long time because of all the waiting around and when it was finally Boyer’s turn the ending was not what he had hoped for.

“I was pumped and I was excited,” Boyer said. “I had practiced a routine for three weeks.”

The guy ahead of Boyer blew the judge out of the water performing moves on rollerskates that Boyer said no normal person could perform without. The judge spent the 20 seconds time slot that Boyer had to dance writing down notes about the guy ahead of him.

“Not one time did he look up at me,” Boyer said.

Boyer said he was looking for the judge to validate whether he was a good dancer or not, but he had to go home without an opinion either way.

Shaking off the judges’ behavior, Boyer returned home and started teaching others how to dance.

“The thing that gives me validation now is the fact that I teach,” Boyer said. “I’ve learned validation doesn’t come from somebody telling you you’re good. It’s the result of what you do. It’s not from some dude sitting behind a table.”

Sara Teskey, the owner of Unlimited Possibilities Dance Studio in the Skyline Plaza, has convinced Boyer to continue teaching hip-hop classes in her studio because they have been a big hit.

Boyer has obliged and will begin classes again in September which will run through the spring.

“I have a life I love. If the judge would have looked up, my life wouldn’t be what it’s supposed to be,” Boyer said in hindsight.

Interesting fact: Dustin has worked in jobs that range from embroidery to construction.