Larry E. Nielsen, 78, of Whalan and formerly of Rushford, died on Saturday, Aug. 25, 2012, at his home, surrounded by his family, following a 22 month battle with cancer. 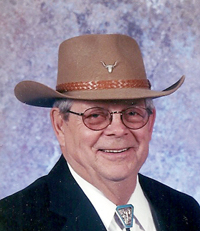 Larry was born on April 5, 1934, in Albert Lea, to Niels K. and Dennise (Petersen) Nielsen. He was raised in the Albert Lea area and attended Albert Lea schools. On Oct. 25, 1953, Larry was united in marriage with Darlene Frandle in Albert Lea. In 1959, he started up Larry’s Uptown Mobil in Albert Lea. In 1968 Larry and Darlene moved to Rushford where Larry purchased Rushford Oil Company. In 1970 he purchased a gas and service station in Rushford which was known as Larry’s Mobil for 35 years. After his retirement, he and Darlene moved to their farm in Whalan where Larry raised Longhorn cattle. Larry was a very active member of the Rushford community. He was a member of Rushford Lutheran Church, Rushford Lions Club, co-founder of the Root River Saddle Club, Root River Tractor Club, Frontier Days Committee, Texas Longhorn Association, Root River Spinners, Bluff Country Tourism Board, Rushford Area Society for the Arts, Rushford Area Business Association and Mission Builders.

The family prefers memorials directed to the donor’s choice.

Leave a memory of Larry, sign his online guestbook and view his tribute video when it becomes available at www.hofffuneral.com.