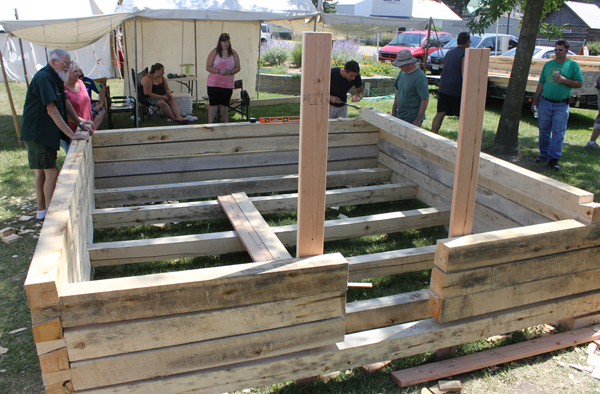 A log cabin is about halfway completed as of Thursday at the Freeborn County Fair. Anyone interested can walk up and ask to learn more about the construction. There are also bleachers nearby to watch the cabin being built. -- Kelli Lageson/Albert Lea Tribune

Fair-goers have an opportunity to get some hands-on learning about how to build a genuine log cabin. 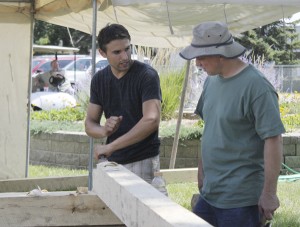 Erik Jensen, left, teaches Kevin Levorson how to cut the log correctly so that it fits with the others to make a sound log cabin at the Freeborn County Fair Thursday.

A new historical feature at the fair this year is the demonstration of how to build a log cabin. The Freeborn County Fair received $15,000 from the County Fair Arts Access & Cultural Heritage Grant, which is part of the Clean Water, Land and Legacy Amendment. It all had to be used in 2012.

“It has to be used for arts and culture,” Fair Manager Norm Fredin said.

The log cabin building demonstration is just one of the new historical features. Bruce Langseth, of Houston, Minn., brought some help and all the logs they would need. Not only are they building the log cabin during the fair week, they welcome people to walk up, learn and even try sawing and fitting the logs together. 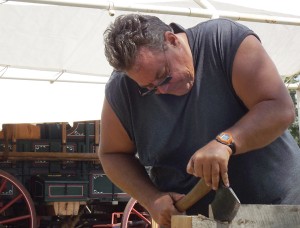 Eric Scites works on the log cabin being built at the Freeborn County Fair Thursday.

The logs are fitted together with dovetail notches so no pins are needed. It only takes six tools to build, but Langseth does use some modern tools as well.

“We have to take this down, and if I built the door the way it’s supposed to I would have to saw it out,” Langseth said.

He knows a thing or two about building log cabins. He’s done similar demonstrations at historical fairs all over the country. And he and his family built his house the same way — though it’s a bit larger. His home is one and a half stories and 48-by-28-feet, made with 8-inch thick logs. The structure being built at the fair will be 12-by-12-feet, made with 6-inch thick logs. It will be about 7 feet tall, with a peak of 10 feet.

Langseth has been building log structures for 25 years, and will gladly teach anyone who’s interested. They’ll be at the fair from around 1 to 7 p.m., but sometimes they stay later. The structure will be mostly finished on Saturday. Langseth said it’s not hard to figure out his favorite part of the process.

“The end,” Langseth said with a laugh. “When the last nail goes in — that’s my favorite part.”

Other historical features at the county fair include the New Ulm Battery and the couple playing Ben Franklin and his wife, Deborah.