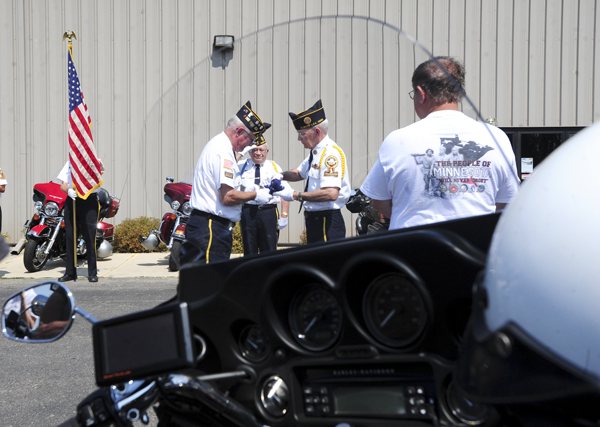 Mark Harig looks on as Albert Lea veterans fold up a flag that is traveling with bikers across 48 states as part of the 2012 Nation of Patriots Tour. The ceremony took place at Bergdale Harley-Davidson on Monday. -- Brandi Hagen/Albert Lea Tribune

Members of the Bergdale Harley-Davidson chapter rode an American flag into Albert Lea on Monday as part of the 2012 Nation of Patriots Tour. 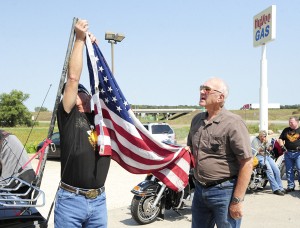 Riders from Eden Prairie attach the American flag to a motorcycle Monday in Albert Lea before attending a ceremony at Bergdale Harley-Davidson. The flag is traveling with riders as part of the 2012 Nation of Patriots Tour and to protect the flag, it was not flown on the interstate.

The tour, in honor of past, present and fallen veterans, began May 26 and took the flag to the East, the West, the Midwest and the South. The flag has flown in Afgananistan and Iraq, and on Labor Day it will return home to Ocohmowoc, Wis.

In the end, the flag will pass through 48 states over 100 days with the help of more than 9,000 people, said former Freeborn County Sheriff Mark Harig.

While Harig was honored as a patriot, he was choking up. He mentioned previous years when other members — Bruce Ellefson of Owatonna, and Axel Hanson of Austin — received the flag.

“I was listening,” Harig said. “But it is more emotional for you, when someone is telling you to do this,” said Harig.

Harig received a patriarch, a notebook and a sign with signatures of the location and past flag bearers and riders from 2012.

“Last year there were memories of different soldiers, and I almost cried when I read it,” said Harig.

Harig left this morning on a 125-mile ride to Waukon, Iowa, with the flag. The flag’s journey will pass through Austin, Spring Valley, Preston, Cresco, Iowa, and then on to Waukon.

The round trip is seven hours including a dinner stop in Dorchester, Iowa. The ride is open to the public.

Compared to the last three years, there has been an increase in the numbers of riders.

“The ride was unorganized in previous years,” Harig said.

With more publicizing, the ride increased numbers from 15 to 20 riders to an estimated 50 riders.

Riders from Rochester and Mason City will join the Albert Lea chapter for the ride to Waukon.

By word of mouth, riders collected donations for wounded veterans and their families.

A local veteran and their family will receive the donations at Bergdale Harley-Davidson from the Albert Lea chapter and community. The veteran is undetermined at this time, and it is also undecided when the donation will be given. In the past, donations were given during the holidays. 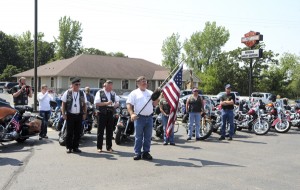 Mark Harig faces the color guard after accepting the flag from riders in the 2012 Nation of Patriots Tour. Harig will deliver the flag to its next destination in Waukon, Iowa and make stops in Austin, Spring Valley, Preston and Cresco, Iowa.

The expected estimate of total donations was $1,000 when the tour departed Albert Lea.

Harig feels honored to be chosen as a patriot. Each year the individual chapter will choose the patriot, whose job it is to carry the flag to the next chapter.

“It really is up to the Harley HOG chapter to choose,” said Harig.

HOG is Harley Owners Group.  For more information or pictures about the 2012 Nation of Patriots Tour, visit www.nationofpatriots.org.

Rider, it is with great honor that I present to you that flag of the United States of America. You have volunteered to take her into your responsibility until your designated course brings you to the next patriot that will accept the same duty and relieve you of yours.

Upon taking this flag, you swear to do so with the greatest respect as you are also accepting all that she represents. You will recognize the many that have stood to defend her. You will humbly remember that many have fallen in their valiant service to her. You accept and carry with you our nation’s collective dignity, pride and pain.

Do you rider accept this flag, this mission, and this responsibility?

Then ride now for honor, for country and for our armed forces. The very heart of our beloved nation travels with you. Godspeed, flag bearer.