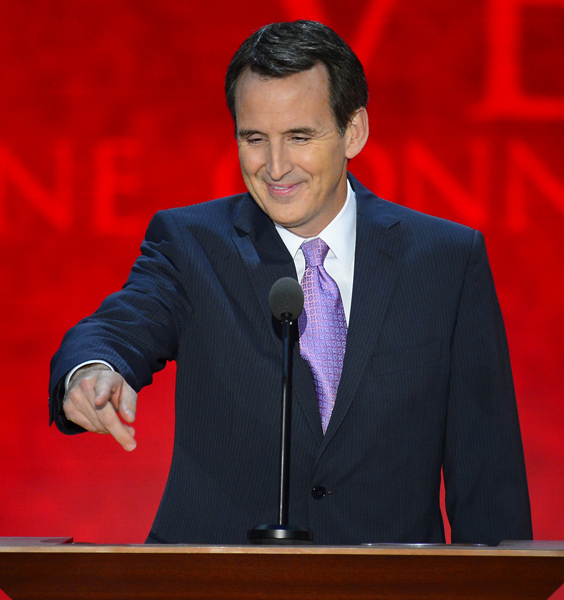 TAMPA, Fla. (MCT) — Taking his turn in the national GOP spotlight Wednesday, former Minnesota Gov. Tim Pawlenty delivered one of the convention’s most scathing critiques of President Obama, calling him the “tattoo president … like a big tattoo, it seemed cool when you were young.”

Regaling the party’s grassroots activists in a 10-minute speech studded with one-liners, Pawlenty dubbed the convention a “retirement party” for a president who “takes more vacations than that guy on the ‘Bizarre Foods’ show” and who has provided jobs only for “golf caddies.”

“Barack Obama’s failed us,” Pawlenty said. “But look, it’s understandable. A lot of people fail at their first job.”

While Pawlenty went on the attack, the star of the night was Wisconsin Rep. Paul Ryan, the GOP nominee for vice president, who vowed that a Mitt Romney administration “will not duck the tough issues” if Republicans win the White House.

“After four years of getting the runaround, America needs a turnaround, and the man for the job is Gov. Mitt Romney,” Ryan told cheering delegates.

An opportunity to get noticed

For Pawlenty, it was the day that could have been. Instead of entering the hall as Romney’s running mate, he arrived as part of the multi-speaker buildup to Ryan, who accepted the party’s nomination in an address that often brought the party’s delegates to their feet.

Pawlenty’s speech was one of the biggest of his two decades in politics, a chance to be seen by a national television audience taking the measure of a newly energized GOP, a party more emboldened than the one he addressed at the Republican convention in St. Paul four years ago. Pawlenty got laughs, as well as cheers for his echo of the free market plea to “just get the government off my back!”

The Obama campaign fired back, noting that despite his jokes, Pawlenty had criticized Romney during the primary campaign for his record on jobs, spending and abortion as governor of Massachusetts.

Many of Minnesota’s delegates erupted in rapturous applause during Pawlenty’s sharpest zingers. They sprang to their feet several times as their beaming faces lit up the giant screens behind Pawlenty.

“He really brought down the hammer,” said Rudy Takala, a 23-year-old Minnesota delegate from Pine City. “It was very aggressive and very out of character for him. I hope he can keep that up during the campaign.”

Media critics were quick to jump on Pawlenty for sounding, at times, like a stand-up comic, but Marge Beard, a 46-year-old delegate from Plymouth, called the speech one of Pawlenty’s strongest.

Close to being No. 2

Pawlenty’s story as the son of a truck driver in South St. Paul underscored the campaign’s emphasis on blue-collar workers in Midwestern battleground states like Ohio, Wisconsin, Iowa — and possibly Minnesota.

His remarks came four years to the day after John McCain introduced the nation to Sarah Palin as his vice presidential running mate, a move that left Pawlenty in the shadows of the GOP hierarchy. It was a perch that brought him close to being Romney’s No. 2.

For some Minnesota Republicans in the convention hall, it was hard not to feel wistful.

“At the end of the day, the candidate can only pick one person,” said former Congressman Vin Weber, a Romney adviser who also worked on Pawlenty’s presidential campaign last year. “So you’re bound to have some people disappointed.”

But Ryan’s appeal to the Tea Party and libertarian factions of the party had electrified the convention even before he spoke, banishing thoughts of what might have been for Pawlenty.

“Many of us in Minnesota had Tim as our top choice, but people are getting pretty excited about Ryan,” said Hennepin County Commissioner Jeff Johnson, a delegate and the state’s National Republican committeeman.

Pawlenty’s loyalty and perseverance, which some observes took as the subtext of his convention speech, demonstrated how he plans to stay in public life: as a Romney surrogate, a potential future candidate for office in Minnesota, or perhaps part of a Romney administration.

“They’ve given him a prominent position [as a convention speaker]” said former Sen. Norm Coleman, another Romney adviser. “I think that speaks volumes.”

In some respects, Ryan’s strong reception among the party rank-and-file has eclipsed Romney, Pawlenty and others in the GOP prmary field.

Andy Parrish, a GOP operative who worked on U.S. Rep. Michele Bachmann’s brief presidential campaign, said Pawlenty would not have brought much to the ticket. The last poll of the Republican field in Iowa showed nearly half of GOP voters were dissatisfied with the candidates, including Romney and Pawlenty. “It would be foolish for Romney to remind the Republicans of what a weak field we had,” Parrish said.

By selecting Ryan, Parrish said, Romney showed he “is serious about governing.”

Florida Sen. Marco Rubio, who was also considered for a spot on the Republican ticket, counted Pawlenty as one of Romney’s best surrogates.

“Governor Pawlenty continues to be one the most effective spokesmen not only for Romney, but also for the Republican Party and the ideals that we stand for,” he said. “So there’s always going to be a place for someone like that. … We need him, and we need him to continue to stay involved and engaged.”

If Pawlenty lacks Ryan’s star power, that did not dispel the feeling of home-state pride that some Minnesotans at the convention might have felt if it had been Pawlenty accepting the nomination for vice president.

“It would have been fun to see it,” said former Senate candidate Pete Hegseth, a Minnesota Republican who heads Concerned Veterans for America. “And that’s not to disparage Paul Ryan at all.”