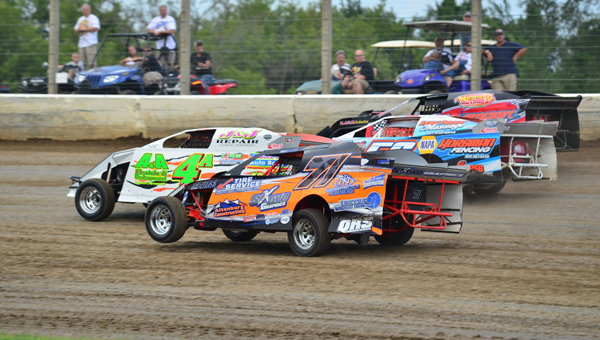 Cummins races locally at Chateau Raceway in Lansing and at Deer Creek Speedway in Spring Valley. 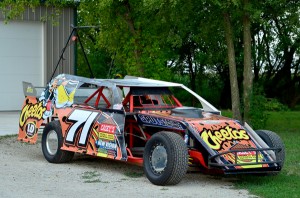 Jason Cummins’ new car is sponsored by Cheetos and Casey’s General Stores as well as his usual sponsors.

Cummins is currently sitting second in points to another rising star, Brandon Davis, of Medford. Cummins is giving up his chance at winning track championships this year by running the 17-race hunt.

He has said on numerous occasions that he isn’t a points racer, he is just out there having fun. If the points work out where he wins, then that’s just a bonus.

Cummins will be starting his journey today at Valley Speedway in Grain Valley, Mo., for the first race of the hunt.

The top modified racers in the country will be doing battle through 17 races to see who can come home with the $15,000 first-place prize.

Each race in the series will pay $3,000 to the winner. The races will be topped off with the Fall Jamboree held at Deer Creek Speedway Sept. 20-22 where the Casey’s Cup champion will be crowned.

Due to how the points system works, Cummins will start the hunt with 33 points, which he has earned from area USMTS events.

He will be in 24th place, 89 points out of first, before he hits the track in Grain Valley, Mo.

Stormy Scott, out of Las Cruces, N.M., will be the points leader at the first race.

Cummins was asked by the USMTS officials to participate in this once-in-a-lifetime opportunity by representing Casey’s General Stores during the entire Hunt schedule.

Cummins has a specially wrapped car that dons the familiar Chester Cheetah on it.

His car will be sponsored by Cheetos, the official snack of the USMTS, as well as his normal sponsors that usually apprear on his car.

Cummins will be make some special appearances at some local Casey’s General Stores to help promote Cheetos and Casey’s.

This is all part of the agreement to run the special car. Also included in the agreement were a Cheetos themed vinyl wrap for the car, and a Cheetos/Casey’s fire suit.

Cummins had more national attention last November when he traveled to Las Cruces, N.M., to race for $10,000 in the modified nationals at the Southern New Mexico Speedway.

Cummins had some early issues at the track, which he had never been to, but ironed those out quickly to earn his way into the main event that evening.

He started sixth in the feature and ended up passing Terry Phillips with a few laps remaining and held on to win the big paycheck.

“I was just down there to have fun,” Cummins said.

Cummins is no stranger to USMTS victory lane as he has won four of the series races.

He recently participated in the World Modified Dirt Track Championship held at his home track of Deer Creek Speedway on July 25–28.

Cummins qualified for the $25,000 to win feature by placing fourth in the qualifying feature on that Wednesday night. Jason started sixth in the feature and went on to run a strong race and finished fourth for a paycheck of $6,913.

Cummins said he is looking forward to this new opportunity to race against the best modified drivers in the nation at tracks he has never seen.

“I’m excited to race on some new tracks,” Cummins said. “I’m just hoping to make the feature every night and not wreck the car. If I can do that, I’ll be happy.”

Information on the USMTS and where to find Cummins’ next race can be found at www.usmts.com.

To check out Cummins’ results, his sponsors and career highlights visit his webpage at www.buckmonsonphoto.com/cummins.