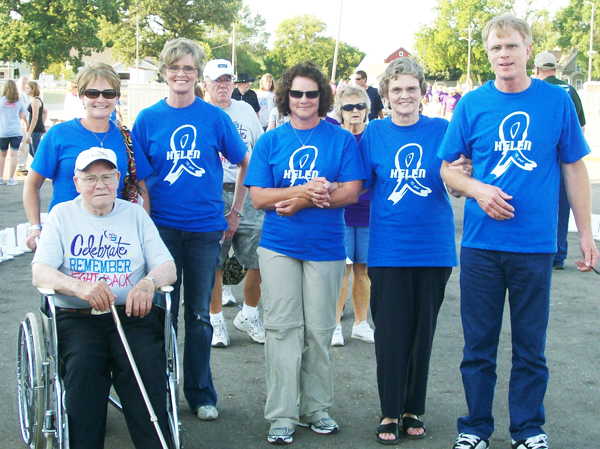 Team Helen participates in the 2011 Freeborn County Relay for Life. From left are Kristi Monahan, Kayla Bremer, Glenda Lessman, Helen Allison, Tim Allison and Kent Allison in the front row. The team consists of Helen and Kent’s children. Every year they participate in The Relay for Life in Helen’s honor. -- Submitted

Helen Allison is proud to be named an Honored Survivor by the Freeborn County Relay for Life.

Allison’s granddaughter Lauren Nelson nominated her to be an Honored Survivor. Nelson is on the Relay for Life organizing committee. Members of their family participate every year in Allison’s honor. Team Helen consists of Kent Allison, Helen’s husband, and their children, Kristi Monahan, Kayla Bremer, Tim Allison and Glenda Lessman.

In 1985 Allison was diagnosed with colon cancer. Her first onset of cancer took her by surprise. She said she was feeling tired after farming and got a strange, “yucky” feeling.

“I put two and two together,” Allison said. She went to get tested for cancer and tested for three weeks before the doctors discovered the colon cancer.

“It’s hard to be told that you have something that will inhibit your life,” Allison said.

Then in 1988 she was diagnosed with multiple myeloma, commonly known as bone marrow cancer. On a hot day she was outside watering her plants when she fell down and broke her back. The cancer had eaten through her spine and she had to have the lesion in her back removed.

She couldn’t stand up because of the pain after the surgery, “Then I’d sit down and try again!” Allison said.

The tumors the cancer left on her bones had to be scraped off through surgery. She also had to have another surgery to clean out cancer in her small intestine. The surgeons cleaned out her small intestine and had to remove 18 inches of it.

Allison has worn out several back supports and has metal rods in both of her legs and her right shoulder and arm are made of steel. The steel rods provide support and prevent her bones from breaking. She has adjusted to these complications by walking with a cane and training herself to be more left-handed.

Kent jokes with their grandchildren that Helen is “Bionic Grandma” because of all the metal in her body.

Right now she remains on chemotherapy treatments and is on a 21-day-on and 7-day-off regimen. She rests for a week until her next procedure. This is her fourth regimen of chemotherapy.

As Allison tells of her struggle, she speaks with humor in certain situations.

“You have to stay positive,” Allison said.

After her surgeries Allison would lie in pain, she said. Her family members wanted to do everything they could to help her.

“They worried more about it than I did, which is natural,” Allison said.

Her family has supported her through her journey. Her faith in God has kept her strong as well.

“I always asked myself what I would do if someone told me I had cancer,” Allison said. “Well, God showed me through giving me the strength to fight.”

She also spoke highly of her doctor Maury Gertz of the Rochester Mayo Clinic. Gertz has stayed by Allison’s side through all her bone marrow treatments. When she first came to him he was a resident and now he’s a cancer specialist and travels around the world to help patients and teach about cancer treatments.

“He threatens he’s going to put me in his suitcase and take me around the world with him while he teaches,” Allison said.

Without the support of her family, friends, Gertz and God she wouldn’t be living as positively as she is today, Allison said.