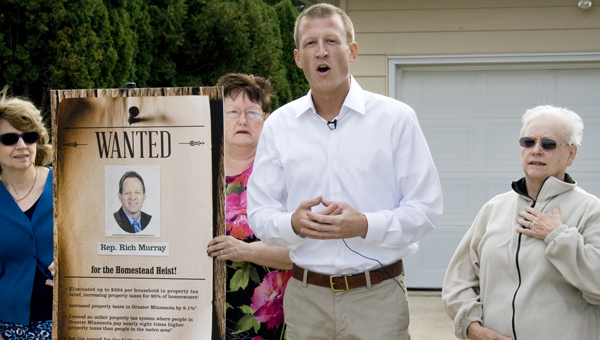 Ryan Furlong with the Alliance for a Better Minnesota speaks at a press conference Thursday morning against District 27A Rep. Rich Murray and other Republican lawmakers who voted for the elimination of the homestead market value credit. -- Sarah Stultz/Albert Lea Tribune

The Alliance for a Better Minnesota and a handful of Albert Lea residents on Thursday called on state District 27A Rep. Rich Murray to restore the homestead market value tax credit.

The credit was eliminated in 2011 as one of the cost-saving measures the state used to close the then $5 billion two-year state budget deficit.

Ryan Furlong with the Alliance for a Better Minnesota said the elimination has caused a $370 million — or 4 percent — increase in property taxes statewide. Greater Minnesota cities are carrying the brunt of the impact, seeing an average property tax increase of 8.1 percent compare to 2.6 percent in the metro area, he said.

“As our economy continues to recover, the last thing we need is higher property taxes,” Furlong said.

The Alliance for a Better Minnesota, a nonprofit, is traveling around the state as part of what it is calling its Homestead Heist Tour, calling on Republican legislators who voted for the elimination of the credit. Albert Lea was their first of several stops the group will take during the next three weeks.

Now, to cushion the blow of the elimination of the credits to homeowners, the state instituted a homestead market value exclusion, which reduces the value of a home subject to taxation. The exclusion provides for a portion of each property valued at $413,800 or less to be excluded from its value for taxes.

Art and Rose Anderson, who served as the Freeborn County Party DFL chairman and vice chairwoman for more than 20 years, spoke of the effects they have seen from the elimination of the credit.

“Everything is going up,” Rose Anderson said. “We’re on fixed incomes. We don’t need this raising of taxes.”

Art Anderson talked about the effect the change is having on farmers, particularly in a time of drought.

She said since moving to Albert Lea nine years ago her taxes have tripled.

The group asked residents to call Murray to repeal the action.

Murray, when called after the press conference, said the alliance was giving misleading information and noted that the group failed to talk about the problems that existed with the market value credit before the changes took place.

“Rather than being productive and trying to find ways to make the state better, they’re simply trying to be divisive,” he said.

Murray said the changes have protected most homes under $150,000, but the properties that have felt the effects the most are agricultural and commercial properties.

“We need to grow the economy and grow jobs,” Murray said. “That will grow the community and grow the tax base.”

He noted he wants to do this by removing barriers for new or expanding businesses.

“If we can do that we’ll have more business and more people contributing to the system,” Murray said.