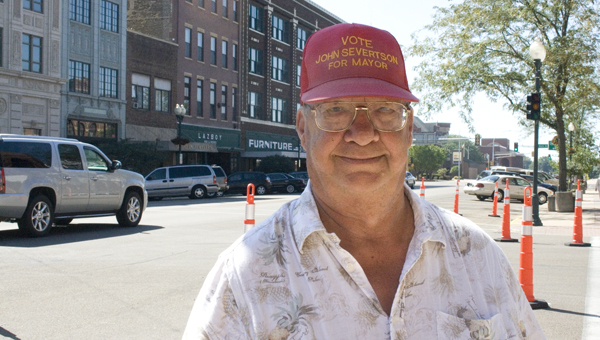 Albert Lean John Severtson is ready to be an active mayor.

On his third run for the mayoral seat, Severtson said he has the time to devote to the seat and help the city succeed.

“I think I’d be a good mayor,” he said. “I’m active. I think I’m positive, and if I go after something I try to accomplish it.”

Severtson, 63, of 214 S. Pearl St. is one of three candidates vying for the mayoral seat during the Aug. 14 primary election. Also running are incumbent Mayor Vern Rasmussen, 48, and former county and township official Keith Porter Sr., 75.

Severtson said he has been walking around talking to people and using signs from a previous election to get ready for the primary election, and he is ready to make a difference.

The following is some information on Severtson’s background, along with his viewpoints on several issues.

Retired from Enderes Tools Co. after 28 years, Severtson and his wife, Becky, have three grown children and three grandchildren.

“I’ve always had a desire to help the city of Albert Lea ever since I moved in here,” he said. “And now that I’m retired I feel I have quite a bit of time to try and do something to improve it.”

He is also a member of the Albert Lea Planning Commission and is the chairman of Albert Lea’s Beyond the Yellow Ribbon group. He also is involved with Albert Lea’s Union Center.

Severtson said the city needs to look for attracting tourism — anything to bring in people from out of town.

He said he thinks the Port Authority should spend more of a focus on the downtown, and he’d like to see an RV park near the old wastewater treatment plant.

“If we can bring people in, everything will go from there,” he added.

Severtson said he thinks it will be difficult to encourage Albert Leans to renew a half cent sales tax that goes to support local lakes in the next few years.

He said when the tax initially was approved, organizers passed it by saying they would dredge Fountain Lake and put in a new Albert Lea Lake dam.

“If you’re going to ask people for money, you have to show them what they’re paying for,” he said.

Severtson has been a vocal opponent to many of the plans for the downtown streetscape project, which reconstructs the sidewalks, roads and sewer and water systems.

Severtson said while he supports replacing the infrastructure, he does not think the city needs many of the extra amenities planned.

He said he would not have as much of a problem with the plans if the city’s residents as a whole wouldn’t have to pay for any of the improvements through property taxes.

Severtson said he supports the Fire Department at full-time staffing and noted he thinks they have been doing a good job.

He also noted the firefighters do a lot more than just put out fires.

“They should make it a priority,” he said.

Severtson said he thinks the Vitality Project, which came to Albert Lea in 2009, is becoming a project that got started here and that is fading out.

“That’s one of my biggest fears with the Beyond the Yellow Ribbon,” he said. “That it will fizzle out if I don’t keep pushing it.”

Severtson said he is somewhat split on whether to support the change in mayoral terms from two years to four years.

He said he signed the petition that circulated to get the issue on the ballot, but he noted he did so to help take the issue to the voters.

“Either the people are going to like what the mayor’s doing or they don’t,” Severtson said. “I don’t think four years will make a difference.”