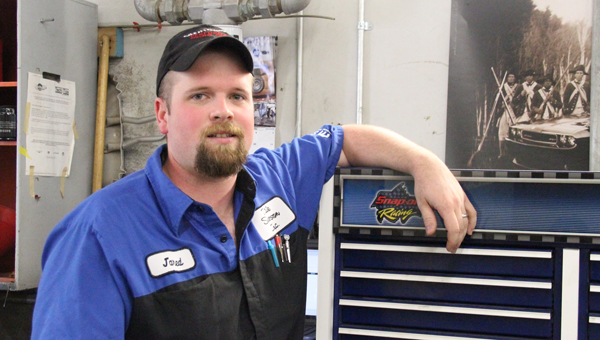 Kelli Lageson/Albert Lea Tribune Jared Dolton, of Conger, was named one of the top Chrysler technicians in the nation recently.

A mechanic at Dave Syverson Auto Center recently was named one of the top Chrysler mechanics in the nation.

Jared Dolton, 26, of Conger, has worked at Dave Syverson for six years. He was named one of 16 top technicians in the nation, out of 2,300 dealerships and 9,000 technicians.

“I do pretty much anything,” Dolton said. “I just try to do a good job.”

He doesn’t specialize in any specific repairs, but said he can fix most things in any Chrysler, Dodge or Jeep. Dolton got his associate’s degree in auto mechanics from Riverland Community College. He’s a certified Chrysler technician and said he had to do online testing to get certified.

“I’ve also been to lots of classes in the Twin Cities,” Dolton said.

Dolton said he does a lot of warranty work like figuring out why a check engine light is on or fixing small leaks. He doesn’t get to interact with customers too often other than when he sometimes has them take their car for a drive to show him what specifically is wrong with a vehicle.

“I like being out in the shop and using my hands,” Dolton said.

He even owns a 2006 Jeep Grand Cherokee and said it’s easy owning a car that he’s been trained to fix.

“It’s a lot easier to work on if something goes wrong,” Dolton said.

Dolton uses all the tools that are available to him, according to DeVriendt, including a hotline where technicians can call to get advice about techniques or how to fix things. DeVriendt said that because Dolton was named one of the top technicians it also reflects well on Albert Lea’s service department as a whole.

Dolton will travel to Detroit from Sept. 23 to Sept. 26 to meet top executives at Chrysler. He’ll also get the opportunity to tour the factory and see the engineering department, two things he’s excited about.

“It will be pretty interesting,” Dolton said.