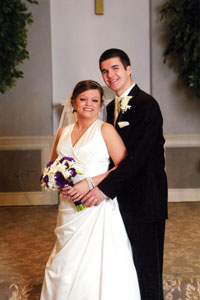 Grandparents of the bride are Bill and Lucille Watney of Northwood, Leonard Frazier of Albert Lea and the late Marian Frazier. Grandparents of the groom are Pete and Barb Peterson of Owatonna and Jorgen and Marge Johnson of Afton, Tenn.

Hosts were Troy, Laura and Spenser Timmerman, family of the bride, of Blue Earth.

A lunch reception was held following the ceremony.

Sarah is a 2006 graduate of Alden-Conger High School and a 2009 graduate of Minnesota School of Business-Rochester with an Associate of Applied Science degree. She is employed as a certified medical assistant at Mayo Clinic Health System in Owatonna.

Brent is a 2005 graduate of Owatonna High School and a 2009 graduate of Oral Roberts University with a Bachelor of Science degree in business administration. He is currently employed with Fanners Insurance as a medical/personal injury protection claims representative in Bloomington.

After a week long cruise to the Mexican Riviera, the couple resides in Owatonna.