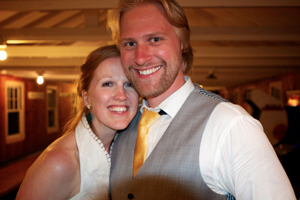 The bride’s parents are Eli and Quincy Whitney, of Nashua, N.H. Grandmother is Alberta Whitney of Nashua.

Pianist was Nona Hovey, aunt of groom, and on trumpet was Matt Van Wagner, “uncle” of bride.

A performance was done by Mike Behrends, brother of groom.

Luke is from Albert Lea, and Meranne is from New Hampshire. They fell in love in Richmond, moved to New York City and got married in Maine. During a freak tropical storm. It doesn’t make sense, but boy was it ever a blast.

The groom has his bachelor’s degree from University of Minnesota in Twin Cities and his master’s degree from Virginia Commonwealth University. He is employed at Saatchi & Saatchi in New York City.

A wedding trip is planned to Fiji from Christmas to New Year’s.