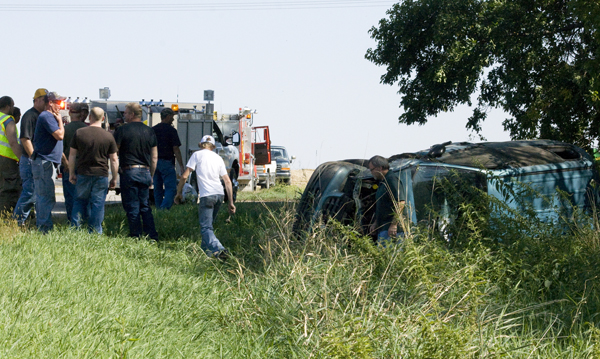 First responders and others stand near the scene of a crashed minivan Saturday afternoon in Conger. One person was injured in the crash. -- Sarah Stultz/Albert Lea Tribune

CONGER — Speed and inattentive driving appear to be the cause of a crash Saturday afternoon in which a man was injured. 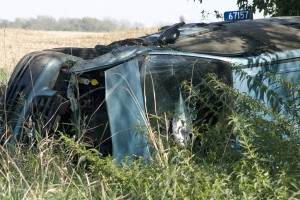 A Plymouth minivan sits crashed on its side Saturday afternoon next to a driveway at 67157 Freeborn County Road 17 near Conger.

According to the Freeborn County Sheriff’s Office, Kevin Roy Peterson, 48, of Albert Lea was transported to Mayo Clinic Health System in Albert Lea for injuries that were not life-threatening.

The Sheriff’s Office stated Peterson was driving a Plymouth van west on Freeborn County Road 17 at about 2 p.m. in Conger when he reportedly crossed over the eastbound lane, collided with an embankment on a driveway, hit a tree at about 8 feet off the ground and then came to rest on the driver’s side of the van in a ditch.

The crash took place at a slight curve in the road about a quarter mile inside Conger city limits.

Peterson was reportedly looking down to find a pack of cigarettes prior to the crash, the Sheriff’s Office stated. He was estimated to be driving about 50 mph. The posted speed limit was 30 mph.