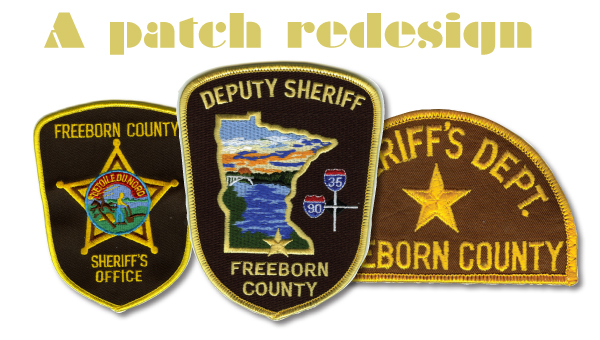 Center: The new patch for the Freeborn County Sheriff’s Office show an image of Myre-Big Island State Park. Left and right: Older patches like these are being phased out in deputies’ uniforms.

For the first time in 30 years, the Freeborn County Sheriff’s Office is rolling out new arm patches on deputies’ uniforms.

Freeborn County Sheriff Bob Kindler said the current arm patch, which is sewn onto deputies’ uniforms on each shoulder, features a sheriff’s star with the seal of the state of Minnesota in the center.

“One of the problems I’ve always had with this one is it didn’t identify where we are from,” Kindler said.

So when the department started to run out of the old patches and needed to reorder, Kindler said he decided to come up with a new design altogether. He said he wanted the patch to include identifying features of the area.

He estimated there were at least 30 different revisions of the design during the last six to seven months.

What the department ultimately chose is a patch the same size as the former one that features an image of a sunset at Myre-Big Island State Park within an outline of the state of Minnesota. To the right of the state is a small Interstate 90 and Interstate 35 intersection, which is specific to Albert Lea and Freeborn County. At the top of the image the patch states either sheriff or deputy sheriff.

“They are slowly starting to show up on shirts already,” Kindler said.

The stitched patches cost $1.70 each through a Minnesota-based company, which is the same as the replacement cost for the former patch. They will eventually be implemented on the jackets and short- and long-sleeved shirts of 65 uniformed staff, including staff at the Freeborn County jail.

“We’re hoping by the beginning of next year to be completely switched over,” he said.

Kindler said another visible change taking place within the Sheriff’s Office is the switch to new patrol cars.

He said the county typically leases its patrol cars. With the lease on five patrol vehicles in the county expiring, and two other vehicles starting to cost a lot of money for repairs, it seemed a logical time to upgrade seven of the Sheriff’s Office 14 patrol vehicles. 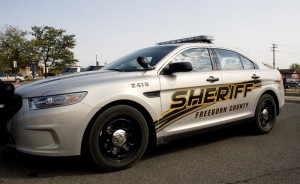 The new patrol cars for the Sheriff’s Office are Fords, modeled after the newer Taurus. -- Sarah Stultz/Albert Lea Tribune

The new patrol cars, which are Ford PPVs — police pursuit vehicles — are similar in body style to the Ford Taurus. They are designed specifically for law enforcement, and the county will be purchasing cages and push bumpers for them. They will feature shotgun and rifle mounts.

Kindler said the vehicles will be leased from Fleet Services in Arden Hills for $590 per month per vehicle plus costs for gas. The previous patrol cars cost $750 per month, but that also included cost of fuel.

The lease states each vehicle can be driven 22,500 miles per year, Kindler said.

The first time the public saw one of the new patrol cars was during the Third of July Parade.

The vehicles also feature new graphics on the sides.