A trip to see the Minnesota Twins 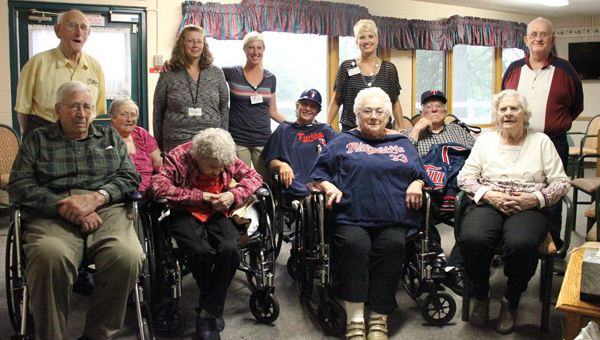 Back row standing from left are Cliff Peterson, Dell Brown, Stacy Johnson, Janelle Merkouris and Russell Olson. Seated in back from left are Barb Christopherson, Luetta Hinkle and Mike Sichko. Seated in front from left are Arnold Levisen, Sylvia Lindahl, Mary Jean Pagenkopf and Florence Brzezenski. These are just some of the residents and staff who got to see the Minnesota Twins play at Target Field after they received 50 free tickets. -- Submitted

Residents at Good Samaritan Society of Albert Lea had a special experience last month — they were offered a free trip to see the Minnesota Twins in action at Target Field. 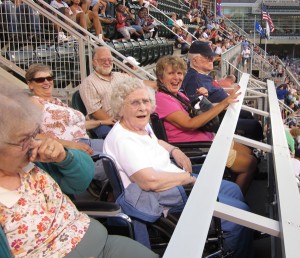 Janelle Merkouris, director of community relations at Good Samaritan, applied for a grant through the Twins Community Fund and received 50 tickets to take residents to the event.

With all the medical staff and volunteers needed, they ended up being able to take 18 residents to the 7:10 p.m. game on Aug. 29 against the Seattle Mariners. A 33-year employee at Good Samaritan said she’d never seen such a good opportunity for residents.

“It was so neat to see residents have this chance,” Dell Brown said.

Many of the residents dressed in Twins gear, and a coach bus left around 4:30 p.m. that day. They were able to pull the bus right up to the door and headed to their seats at the outdoor stadium. Volunteers and staff worked hard during the travel time and during the game to make sure the residents were comfortable and had everything they needed. 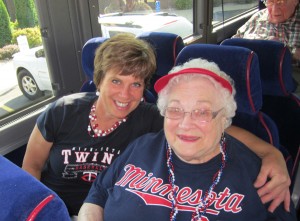 Resident Mary Jean Pagenkpof, right, and a friend pose for a photo on the way to the Twins game Aug. 29.

“The staff were all helpful and very well organized,” Merkouris said.

Residents agreed they had great views for the game, and they were all able to get snacks at the game. The group stayed for almost all nine innings, but left right before the end since the Twins were winning 10-0.

The group even thinks they were good luck for the Twins.

In the previous two games against the Mariners the Twins lost, but at the Wednesday game the Good Samaritan group went to the Twins won 10-0. It wasn’t hard for residents to think of their favorite part of the day. 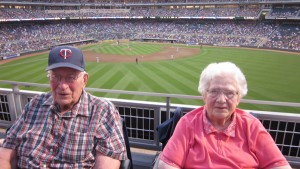 Residents pose for a photo at Target Field on Aug. 29. A group of 18 residents, along with staff, family and volunteers, got to see a Minnesota Twins vs. Seattle Mariners game.

Some of the residents are avid Twins fans, watching them on TV or listening to the games on the radio. All said they’d love a chance to go again.

“We were excited to have a day out,” resident Luetta Hinkle said.

And, of course, it was nice to see the Twins win, too.

“It was a great game,” resident Mike Sichko said.

The group finally returned back to Good Samaritan a little after midnight. Though some were tired, Merkouris said most stayed awake on the ride home because they were still excited about seeing the game. 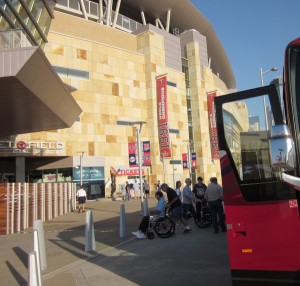 Good Samaritan Society residents disembark a coach bus on their way to a Minnesota Twins game on Aug. 29.