Back to the farm 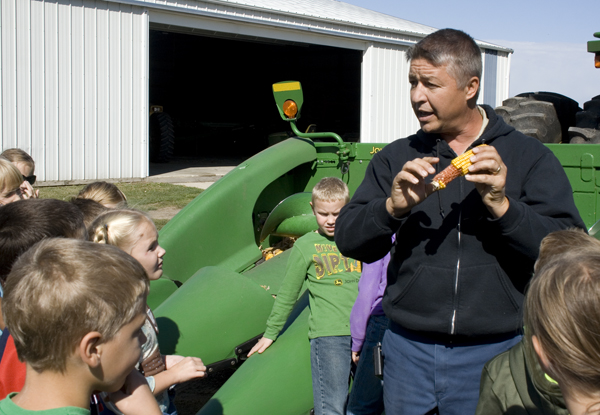 Kiven Lukas speaks to United South Central students Wednesday about harvesting corn while at the farm of Brent Young and Gary Braaten near the Freeborn and Mower county line. -- Sarah Stultz/Albert Lea Tribune

Third-graders from across the area traveled to three farms in Freeborn County Wednesday to learn the basics of farm life. 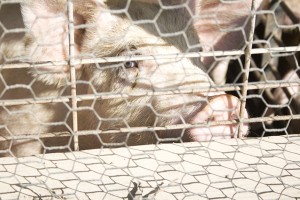 A hog peeks through a fenced wall of a barn Wednesday at the hog farm of Brent Young and Gary Braaten. The farm can hold as many as 4,000 pigs at any given time.

Put on by the agricultural committee of the Albert Lea-Freeborn County Chamber of Commerce, the event aimed to educate youth on the agriculture in the community, said chamber Operations Manager Tami Jensen.

For some, it was even their first time on a farm.

“My favorite part was seeing the pigs,” said United South Central student Meredith Klingbeil. “They were fun to look at. I’ve never seen one that close up before.” 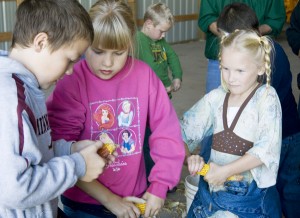 At the hog farm, the students were split into two groups.

While one group walked over to see the farm’s hogs, the other group got to look at farm machinery for harvesting corn and soybeans. Then they switched.

Kiven Lukas, of Lukas Brothers, which own the pigs at the farm, said the farm has four barns that each hold 1,000 pigs. The pigs on average weigh 270 pounds.

As the students approached one of the hog barns, they began batting their arms at dozens of flies and began commenting on the smell coming from the animals.

“We try to show them how pigs are raised,” Lukas said.

For the crop harvesting, Lukas showed them three pieces of machinery and explained that a combine can typically harvest about 70 to 80 acres of corn per day.

“They drive down the roads and see these things, but they never know what they are,” he said.

At the end of the tour the students got to try their own hand at shelling corn, and even got the chance to get a temporary tattoo with a farm animal on it.

“My favorite part was picking the corn off the cob,” said student Delaney Caudill. “It was fun.”

Others commented about how they enjoyed feeding a calf with a bottle at the dairy farm or picking potatoes at the potato farm.

The visits were sponsored by Agstar Financial Services and Cargill Aghorizons.