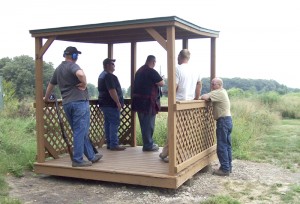 The tournament ended with a shoot-out because Tech Tool of Austin was tied with Pub 69 of Twin Lakes. The top scorer from each team faced off. Ray Monson, a member of Tech Tool, helped his team to a tournament win.

Monson was the top scorer of the tournament with 49 out of 50 shots made.

The SLLRC would like to thank all of its sponsors and people who donated time and money to help with the tournament.

The event was held to help with the restoration of State Line Lake.

The SLLRC group has participated in highway cleanup and helped in many other ways to support the Emmons community.

Anyone who would like to participate or who has questions about the lake restoration project may contact Bruce Epland of Emmons or the City Hall of Emmons.