Dorothy N. Reyerson, 87, of Northwood, died Saturday, Sept. 1, 2012, at Good Samaritan Society in Albert Lea, where she had been a resident for the past five years. 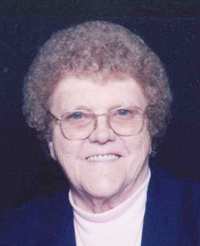 Funeral services will be 1:30 p.m. Wednesday at Silver Lake Lutheran Church in rural Northwood with the Rev. Randy Baldwin officiating. Burial will be at Silver Lake Lutheran Cemetery. Visitation will be from 5 to 7 p.m. Tuesday evening at Mittelstadt Funeral Home, 902 East Main Street, Lake Mills, IA 50450, and again one hour prior to the service at the church.

Dorothy N. (Landass) Reyerson was born April 12, 1925, to Anna Längeland and Lars Landass in Albert Lea, Freeborn County. She grew up in the Emmons area. She was baptized and confirmed in the Emmons Lutheran Church and attended Emmons School.

On Oct. 9, 1943, she was united in marriage to Maurice Reyerson at the First Lutheran Church parsonage in Albert Lea. Together, they had four daughters, while living on the Reyerson homestead, a Century Farm, raising cattle and milking cattle, then later added feeder cattle along with hogs, sheep, chickens and other various farm animals. They did all this throughout their entire married life while also farming the land.

Dorothy was an active member of Silver Lake Lutheran Church where she served on various committees and councils. She was active in the Albert Lea Moose Club and Eagles Lodge where she served as an officer.

She loved to visit friends, neighbors and family. She enjoyed traveling, fishing and camping with her husband and her family. She and Maurice also loved dining and dancing.

Dorothy was preceded in death by her grandparents; her parents; her husband; her mother and father-in-law; brothers: Lloyd, Alfred and Oscar Landass; sisters: Myrtle Peterson, Martha Klukow, Lillian Hoyne and all their spouses; a grandson, Todd Brunsvold; one niece and two nephews.