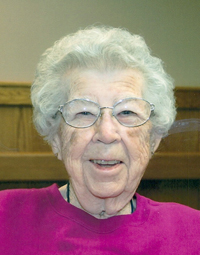 Funeral services are at 11 a.m. Thursday at the Trinity Lutheran Church in Bemidji. Visitation will be from 5 to 7 p.m. Wednesday at the Cease Family Funeral Home in Bemidji and one hour prior to the service at the church on Thursday. Interment will be at the Mansfield Lutheran Cemetery in Mansfield.

Elma was born Aug. 30, 1916, near Fairmont, the daughter of Samuel and Iona (Logan) Stoneback. She moved with her family to Alden when she was 9 years old where she graduated from Alden High School in 1934. She married Elmer Reim on June 5, 1937, on the farm near Alden. They lived south of Alden for eight years and moved to Bemidji in 1945. They did custom combining for 20 years, starting with the harvest in Oklahoma and moved north, ending up in Saskatchewan, Canada. They retired in 1978. She then worked for the Bemidji hospital and the nursing home as a cook for 5 1/2 years. She was a member of Trinity Lutheran Church since 1945.

She is survived by a sister-in-law, Marion Stoneback of Alden; brother-in-law, Elvin Reim of Selah, Wash.; several nieces and nephews; and her goddaughters: Nicki Lemmer and Linda Lemmer both of Bemidji.

She was preceded in death by her parents; husband in 1999; and brother, Vance.

Honorary casketbearers will be the Thiele family and nieces and nephews.

Messages of condolence may be left at ceasefuneralhome.com.