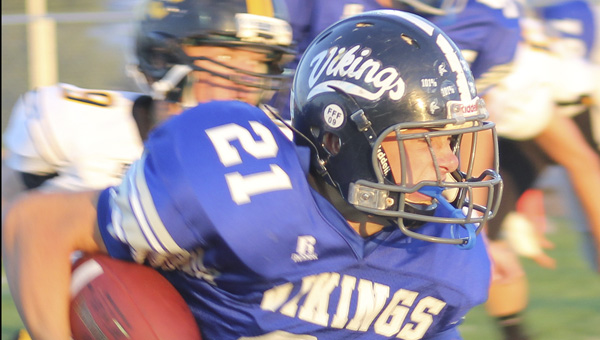 Logan Butler, running back for the Vikings, turns upfield Friday during the first quarter of the team's Homecoming game against Janesville. -- Tim Engstrom/Albert Lea Tribune

NORTHWOOD — Janesville’s Hunter Meyer kicked a 45-yard field goal with less than a second on the clock to defeat Northwood-Kensett Friday.

The Vikings were celebrating Homecoming Week, but lost the game 23-20, after being ahead 8-7 at the half.

The first score came with 1:16 left in the first quarter, with Northwood-Kensett’s Logan Butler reaching the end zone on a seven-yard run, with Cameron Batton getting the 2-point conversion. 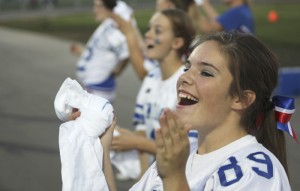 Cheerleader Taryn VanRyswyk, a junior at Northwood-Kensett High School, gets the crowd riled up at the end of the first quarter Friday before throwing a T-shirt to fans. The school celebrated Homecoming Week. --Tim Engstrom/Albert Lea Tribune

On a three-yard run Meyer scored a touchdown with 2:12 left in the half and kicked the extra point.

The third quarter started slow and finished hot. With 3:18 left, Northwood-Kensett’s Brandon Brockman scored a touchdown on a four-yard run, but the Vikings failed on a conversion attempt. That made the score 14-7.

The Wildcats came right back, with Meyer throwing a 52-yard pass to Chris Bright for a touchdown with 3:03 left in the third, but he missed the kick afterward. The Vikes still led 14-13.

Janesville’s Caleb Rieken gave his team the lead with a one-yard run with 10:13 left in the game. Meyer made the kick this time. 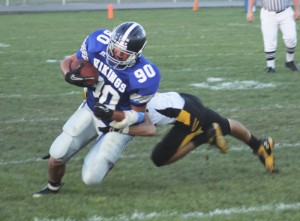 At the 5:33 mark, Vikings quarterback Cameron Batton tossed a 16-yard pass to Alex Ritzert to tie the game. A failed conversion threatened to send the game into overtime.

However, the Wildcats had what few teams in eight-man football have: a kicker. Meyer split the uprights with 0.8 left on the clock, spoiling the Homecoming game for the Northwood-Kensett student body.

The Vikings drop to 3-2 for the season. They travel to Riceville next week. 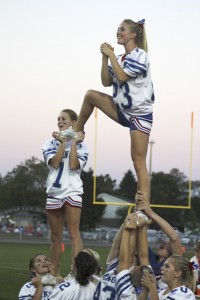 Cheerleaders at Northwood-Kensett perform a pyramid Friday during the Homecoming game. Chandler Capitani is on the top of the pyramid, with Katelyn Jaspers on the left. -- Tim Engstrom/Albert Lea Tribune

Janesville: 12 first downs, 5 penalties for 31 yards, 2 fumbles with both lost, 37 rushing attempts for 118 yards and 2 touchdowns, 10 passing attempts with 6 completions for 111 yards, 1 interception and 1 touchdown