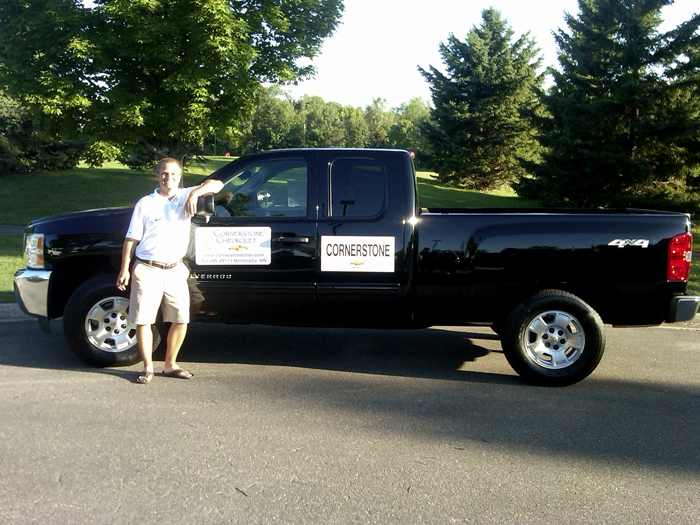 Greg Posthumus, an Albert Lea resident, stands next to a truck he won for hitting a hole-in-one at Rush Creek Golf Course during a tournament in Maple Grove. --Submitted

Only his second time on the Rush Creek Golf Course in Maple Grove and Albert Lea resident Greg Posthumus hit a 165-yard ace on the No. 7 hole, a par 3.

Posthumus had a lot to celebrate. Not only was it the first ace he’s hit in his 20 years of golfing, but it was during a tournament where the hole was sponsored by Cornerstone Chevrolet in Monticello.

The sponsorship included the giveaway of a Chevy Silverado to the person who hit an ace on the hole.

“I was in denial,” Posthumus said. “I didn’t believe it went in. I thought the ball bounced, probably over.”

He said he figured out it went in when a spotter came running at his group yelling and waving his arms.

“It was chaos after it happened,” Posthumus said.

So chaotic, he doesn’t even know how his team ended up placing.

“It wasn’t a high priority after it happened,” Posthumus said.

Wim Harris, a representative from Cornerstone Chevrolet, said the dealership was excited to give the truck away because they are a new buisness and it was a way to get their name out.

Harris, who watched Posthumus make it in, was also excited the winner.

“What a deal for him to hit a hole-in-one and hit it on a sponsored hole,” Harris said.

According to Harris, the business will continue to do sponsorships in the future.

As for Posthumus, the win is starting to become a reality because he has the truck in his possession.