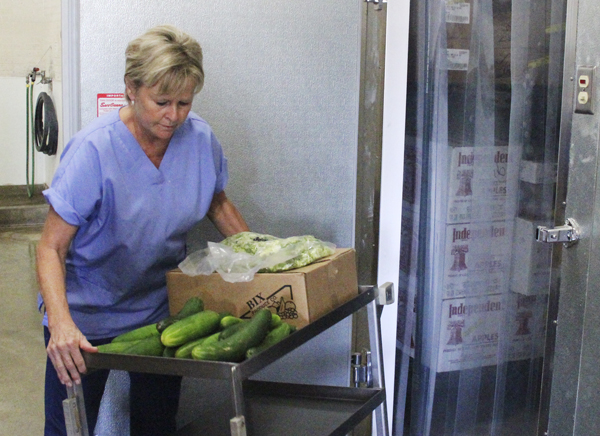 Making school lunch menus under new federal guidelines has been no picnic — but finding foods picky children will eat is proving to be the biggest challenge. 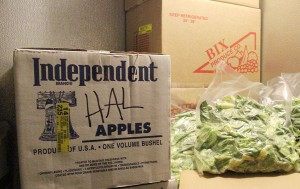 Albert Lea School District’s director of food service, Mary Nelson, said the district has been adjusting to new federal guidelines for lunch menus that include more fruits and vegetables, more whole grains and restrictions on calories, among other changes.

“It’s the first overhaul of federal regulations in about 15 years,” Nelson said.

Over the summer Nelson worked with the district’s food service management company, Chartwells, to create menus for all the schools. That’s no small task considering the district serves about 2,400 meals per day. The broader goal of the federal changes is to work to try to combat childhood obesity.

Some of the new guidelines include having students eat at least a half cup of a fruit or vegetable — and there is no limit on fruits and vegetables — along with the main course selection and milk. There are also minimum and maximum amounts for protein, grains and total calories. 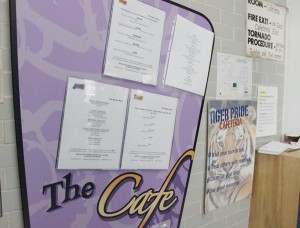 Menus for the week are posted at the cafeteria door at Southwest Middle School.

“It’s what we have to do to meet the guidelines,” Nelson said. “At the elementary level generally this is not an issue.”

Issues arise at Southwest Middle School and Albert Lea High School, where there are students who don’t want to take fruits and vegetables on their tray. If they don’t, the school is not reimbursed for federal monies it receives per meal, and students on free and reduced lunch plans must take at least a half cup of fruits or vegetables to get the reduced price or free lunch.

“They’re saying ‘Well why do I have to?’” Nelson said.

The issue that arises is that students can take the fruit or vegetable, but there’s no making sure they’ll eat it. While the hope may be that if it’s on their tray they’ll be willing to eat it — for some students those extras are just one more thing to throw away.

“Garbage in the first week of school has increased,” Nelson said.

But the majority of students are learning that there’s an easy way to meet the fruit and vegetable requirements and still enjoy them. Each day at Southwest there are four choices — usually two vegetables and two fruits. For Wednesday’s menu the students had the choice between four main items: Chicken Parmesan on whole grain pasta, pepperoni pizza slice, BLT sandwich or a hamburger. The four fruit and vegetable choices were a Caesar romaine salad with light dressing, baby carrots, apple slices and peaches. With milk, one main choice and at least half a cup of the fruit and vegetable choices, that lunch would count as a full meal under the federal guidelines. 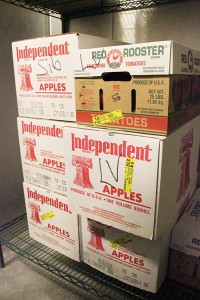 The walk-in cooler at Southwest Middle School is stocked with fruits and vegetables to meet new federal guidelines for lunch meals.

Other changes are coming as well. Nelson said the federal guidelines are progressive, meaning that more changes will come in the next few years. The plan even says by 2022 that all schools will meet a set baseline for sodium content in food. Nelson said that’s because the food manufacturers will have to catch up with the guidelines, because the choices aren’t there for low-sodium foods and condiments. Under the newest guidelines the district has to have half of all grains be whole grain; eventually federal guidelines will require all grains to be whole grain.

Nelson said one of the popular produce items are a fruit and vegetable salad made with apples, pineapple, mandarin oranges, cucumber and jicama, and children are enjoying any time applesauce, kiwi or apples are served. Some of the items that haven’t gone over so well are a broccoli raisin salad and a chickpea salad containing garbanzo beans, onion and green pepper. Meeting the requirement for legumes is a challenge.

The baked beans are vegetarian, and the school tries to offer healthier versions of most foods. The pizza crust on the school’s homemade pizza has changed to include whole grains and is thinner to meet calorie restrictions. And any time the school offers light ranch dressing, students have no problem getting carrots or broccoli to dip in the dressing.

While Southwest students have four main food choices each day, elementary students have a hot food choice and a cold sandwich or salad choice. High-schoolers have the most choices with a hot food line, pizza line, deli line and hot sandwich line. And there’s still the option for students to bring lunch from home, and there are no guidelines to follow with that route.