‘I’d better get out of here’ 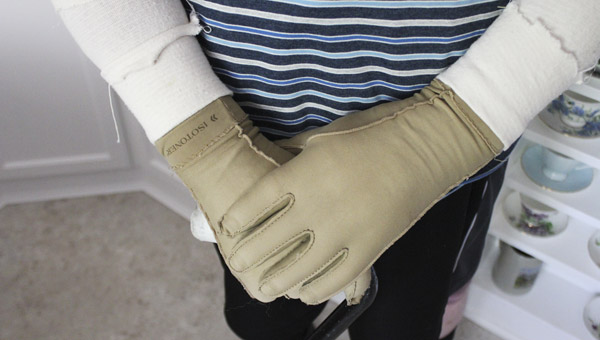 Ralph Yotter wears coverings over his hands and arms. Shown are what he was wearing Wednesday. He received new coverings on Friday. He said underneath are open wounds that are "gross."--Tim Engstrom/Albert Lea Tribune

Ralph Yotter blacked out momentarily when his house on a small farm north of Freeborn exploded with him inside it on June 8.

The roof collapsed all around him. The 75-year-old man came to and saw skin hanging off his hand, though he couldn’t feel any pain from the severe burns. He thought, “I’d better get out of here.”

He couldn’t go out the way he came, through the front door, so he walked out on the deck, then came around the house to the front.

Meanwhile, his wife, Pat, was, in her words, “yelling bloody murder.” She had been in the front yard and was knocked down by the force of the explosion but otherwise uninjured. She reached for her cellphone, but it wasn’t in her pocket. She found it in their car, but there was no signal, so she walked down the road to call 911.

Ralph went to check the LP tank, and it was already off. He then encountered Pat. She saw his burns. Even his face had blisters. Anyone who meets the Yotters can tell they dearly love each other — they laugh often and have many inside jokes — and she was concerned about injuries to her dearly beloved. He encouraged her to calm down. 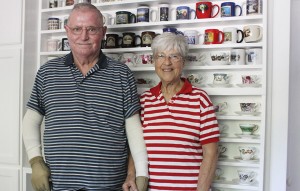 Ralph and Pat Yotter stand in front of coffee cups she has collected over the years. She has every one of the annual Minnesota State Park cups, including the 1997 cup featuring Myre-Big Island State Park. --Tim Engstrom/Albert Lea Tribune

Firefighters and rescue personnel from Freeborn were the first to arrive. Firefighters from nearby cities came, too. So did Freeborn County sheriff’s deputies, Albert Lea emergency personnel and eventually a helicopter from Mayo Clinic.

The emergency medical technicians loaded Ralph onto the helicopter. The bird took off, and that’s the last memory Ralph would have of being awake until five weeks later.

The chopper EMTs put him under and sprayed his hands, arms and face with a solution for burns. They flew him to the burn unit at Regions Hospital in St. Paul. He had suffered third-degree burns on his arms, legs and belly.

Pat was taken by ambulance to Mayo Clinic Health System in Albert Lea to be checked out. She was uninjured.

In St. Paul, doctors induced Ralph into a coma, and there he remained while medical professionals did their healing work. They removed dirt and other gunk from his burns. They twice had to treat him for pneumonia. He usually required a breathing tube, and when it could come out, family and friends rejoiced because it meant his condition was improving. But when it had to be reinserted, it was sad news.

Ralph underwent skin grafts on his fingers, hands, arms and left leg. His other burns were allowed to heal without grafts.

On the morning of July 14, doctors brought him out of the coma. Nurses gave him a bath and cleaned his wounds. In the afternoon, Pat was allowed to see him. Ralph asked, “Who are you?”

She laughed. They have a long-running inside joke where he asks that question, then asks her out on a date. 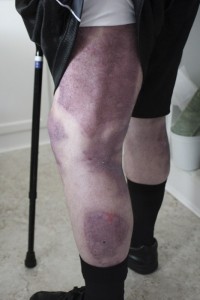 Ralph Yotter shows how his left leg is healing. Places that look rectangular are where skin grafts were done. -- Tim Engstrom/Albert Lea Tribune

The explosion had burned off his eyelashes and eyebrows. The medical staff cut off his hair and his mustache. By July 14, he had some hair back but still no mustache, something he has had for decades. He asked Pat for a mirror. He didn’t recognize the face.

Pat was glad to help nurses care for him. At one point that afternoon, he coughed, and she had to suction phlegm out of his throat. He then looked at her and asked, “What day is it today?”

Ralph was startled to learn how long he had been under. “Oh my God. I’ve got to get the hell out of here.”

Pat informed him he had to stay but she was smiling and happy to be speaking with her husband.

“So many times he was near death, it wasn’t even funny,” she said.

They had resided on the 18.87-acre farm since 2004, after the house was completed. Ralph likes to hunt, and the property has suitable woods for deer hunting. They were four days from closing on the sale of the farm when the house blew up.

“We wanted to give it one last look,” Pat said. “Well, we got our last look.”

When he entered the house, Ralph smelled something he didn’t recognize. He has poor taste and smell anyway, but he could smell this. It seemed like rotten pickles. Just as the thought crossed his mind — kaboom!

Pat never entered the house but said she smelled an odor shortly before the big bang when she had picked up keys she dropped in the yard near the septic tank.

The state fire marshal determined that sewer gas caused the explosion and said it was sparked most likely when Ralph flipped on a light switch.

Ralph said he never turned on a light. He speculated that perhaps static electricity from walking or something else altogether ignited the explosion. He isn’t sure how or why the gas was leaked, particularly considering the inspections days before. Obviously, the sale fell through, and the Yotters still own the farm.

Pat said she is glad Ralph’s face wasn’t burned as badly as it looked the day of the explosion, when it had blistered bubbles on it.

“Now, he looks pretty good. It’s a little red, but he lucked out,” she said.

Ralph’s legs and belly have healed well, and he wears coverings over hands and arms at all times. Underneath, there are open wounds.

Nothing from the burns hurts now. Doctors told him the fire from the explosion burned off nerve endings. And during the operations on his wounds he was unconscious.

“I never have felt anything. Shock was all,” Ralph said.

What’s it like being in a coma for week on end? All he recalls are some strange dreams but nothing else.

While Ralph and Pat were in St. Paul, one of their sons moved into their South Broadway house. Neighbors helped, too, and many people sent cards.

The Yotters have six grown children, 12 grandchildren and 14 great-grandchildren. There were many people glad to see them back home.

Ralph came home to Albert Lea on Aug. 1. Pat played nurse, helping him do just about everything, from getting in and out of bed to going to Health Reach every weekday for occupational and physical rehabilitation.

Once he could walk, which he does now with the assistance of a cane, life became easier. Pat works his hands, opening and closing them, to keep them from being stiff. Ralph has learned not to use his elbows and remarked about how often they are needed. He also commented about his muscle atrophy from lack of movement.

“When you lay in bed for month, boy, your muscles disappear,” he said. “I had to learn to walk again.”

At their home, Ralph watches the deer. There is open land to the east and west that the deer like to move through. He looks forward to the next time he can hunt.