The memorial service for John Arvid Westeng will be at 10 a.m. Saturday at Bonnerup Funeral Service in Albert Lea. The Rev. Todd Walsh will officiate. Interment will be in the Hartland Cemetery. Visitation will be held one hour prior to the service. Military honors accorded by Albert Lea veterans organizations. 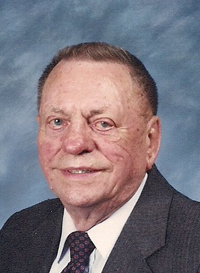 John Arvid Westeng was born April 20, 1918, in Norway. He came with his parents to the United States at age five, first to Wisconsin and then settling in Hartland.  John attended Hartland School and worked as a carpenter with his dad.

He enlisted in the Army from 1939 to 1941 and after Pearl Harbor he re-enlisted in the Navy where he served until his retirement in 1974. John worked in maintenance and woodworking at the dry docks in San Francisco. He also worked on the Polaris Missile System. John lived in Redwood City, Calif., until he moved to Albert Lea in 2001.

John is preceded in death by his wives: Klennie and Gladys; his parents Andrew and Kari (Lundberg and her second husband Leonard Ersland) Westeng; and his brother and sister-in-law, Melford and Marian Westeng of Hartland.

Left to remember John’s stories are his nephew and wife, Jim and LaJean (Berg) Westeng; his nieces and husbands: Becky and Alert Thofson and Janet and Bruce Himmerich of Albert Lea. John is also survived by step-children: Jerry Briggs and Pat Briggs in California and Carol Jean Redman and her daughter Leslie in Louisiana; eight great-nephews and nieces and seventeen great-great-nephews and nieces.

We will miss you John-John. Blessed be his memory.