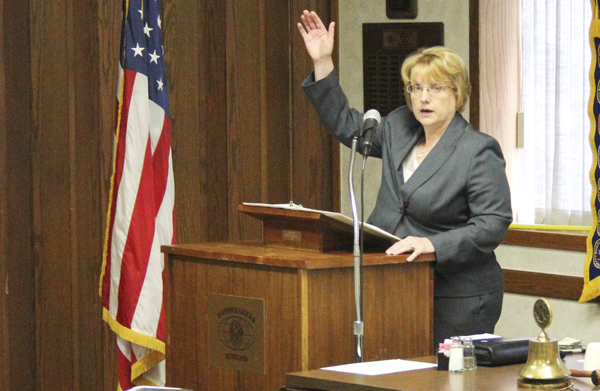 If people want protection from the courts, they must become vocal supporters of the courts, said Minnesota Supreme Court Chief Justice Lorie Gildea.

“Justice is not an option in Minnesota. It is an obligation. It is a first principle,” Gildea said.

The native of Plummer, a town of less than 300 people in Red Lake County, spoke to the weekly meeting of the Noon Kiwanis Club at the American Legion Club. Monday was Constitution Day.

She described how the courts system suffered three years of cuts prior to her becoming the chief justice in 2010. This caused delays in cases and difficulty in handling the caseload.

Gildea explained why funding the courts is a first principle by going into constitutional law.

On Sept. 17, 1787, the Founding Fathers signed the U.S. Constitution. She said that Alexander Hamilton, in the Federalist Papers, which was an argument in favor of the Constitution, wrote: “There are certain primary truths, or first principles, upon which all subsequent reasoning must depend.”

Gildea connected this concept to the founders of Minnesota. The Minnesota Constitution, right at Section 1, states: “State government is instituted for the security, benefit and protection of the people.”

“The courts,” Gildea said, “are at the heart of that first principle.”

She noted that a few paragraphs later in Section 8, the Minnesota Constitution says: “Every person is entitled to a certain remedy in the laws for all injuries or wrongs which he may receive to his person, property or character, and to obtain justice freely and without purchase, completely and without denial, promptly and without delay, conformable to the laws.”

In other words, the state Constitution commands that people are entitled to justice, Gildea told the Kiwanians and several visitors primarily from the Albert Lea legal community.

The first chief justice of the Minnesota Supreme Court, LaFayette Emmett, wrote when ruling on Davis v. Pierse in 1862, affirmed this.

Against the backdrop of the Civil War, the state Legislature passed a statute prohibiting people who helped the Southern rebellion from having access to the state courts. A Mississippi man sought to redress an issue with his property in Minnesota but this law stood in his way.

Emmett wrote, “In this state, no one, not even the worst felon, can be denied the right to simple justice.”

Gildea said the courts are in jeopardy today because the legislative and executive branches treat the judicial branch as an agency rather than a constitutional obligation.

She said she helped form a coalition to push the Legislature “to get back to first principles.” She said in the current biennium the state courts’ $275 million budget finally didn’t slide backward.

“But the outlook is less than rosy,” she added.

Many interests lobby the Legislature on a regular basis and have the mechanisms and constituencies in place: education, transportation, commerce, health care and so forth.

The judiciary doesn’t have the same constituency that other groups have, she said. It doesn’t exist for merely one segment of the population, like the examples given. The courts work for all 5 million Minnesotans.

“It is time for us, including all of you in this room, to start speaking up,” Gildea said.

She said Minnesota courts cannot go back to the days of budget cuts. She said voters need to ask politicians: What are they going to do for the courts system?