The funeral service for Nellie M. Rasmusson will be at 2 p.m. Saturday at the Emmons Lutheran Church. The Rev. Cathi Braash will officiate. Visitation will be one hour prior to the service at church. Interment will be in the Oaklawn Cemetery in Emmons. 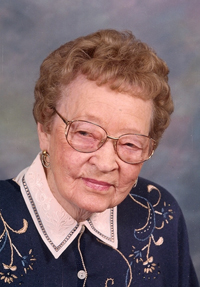 Nellie was born on Feb. 11, 1916. The daughter of Cornelius and Cora (Myrand) Slette, she attended and graduated from Albert Lea High School. On Jan. 28, 1939, she married Everett Rasmusson in Northwood and together they raised three children. The two resided in Emmons and following Everett’s retirement, spent 17 years wintering in Mesa, Ariz.

Nellie was a member of Emmons Lutheran Church where she taught Sunday school, and participated in the church circle. She also was active in the Emmons Civic Improvement Club, the Senior Citizens Club and the Legion Auxiliary.

She was a family oriented, kind woman who loved playing cards, sewing, baking, making lefse and lutefisk, golfing, crafts and the Minnesota Twins.

Special thanks to the wonderful and caring staff at Oak Park Place.