Funeral services for Paul R. Levisen of Albert Lea will be at 11 a.m. Thursday at Trinity Lutheran Church in Albert Lea. The Rev. Curtis Zieske will officiate. Interment will be in Graceland Cemetery. Military honors will be accorded by Albert Lea veterans organizations. Visitation will be from 4 to 7 p.m. Wednesday at Bonnerup Funeral Service, Albert Lea, and one hour before the service at the church. 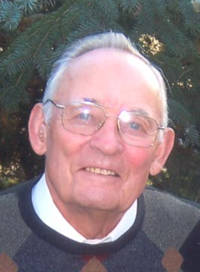 Paul Richard Levisen was born in Freeborn County on July 29, 1927, the son of Jens and Marie (Jensen) Levisen. He was a lifetime Freeborn County resident and attended Clarks Grove, Lerdal and Murtaugh Schools. He was 17 when he joined the Merchant Marines. Paul joined the United States Army after the war and was trained as a paratrooper and in glider operation and served with the 82nd Airborne Division at Fort  Bragg, N.C.

Paul married Ruth Elaine “Dolly” Aspenson on March 17, 1951, at the First Lutheran Church in Albert Lea. Early in his life he farmed and then began working for Thompson Dairy, Rochester Dairy and Sampson Dairy until his retirement. From 1962 to 1992 he operated the Levisen and Dahl Footlong and Malts Food Stand at the Freeborn County Fair.

Paul was an active lifetime member of Trinity Lutheran Church. Paul was a lifelong outdoorsman and enjoyed hunting, trapping, fishing and taking his yearly trip to Canada with his friends for 45 consecutive years.  He enjoyed bowling and playing golf. Paul was a member of the American Legion, Elks, Eagles and the Danish Brotherhood and was very proud of his Danish history. Paul especially loved his wife Ruth, children, grandchildren and great-grandchild. Paul was a great friend to many and enjoyed making new friends wherever he went.