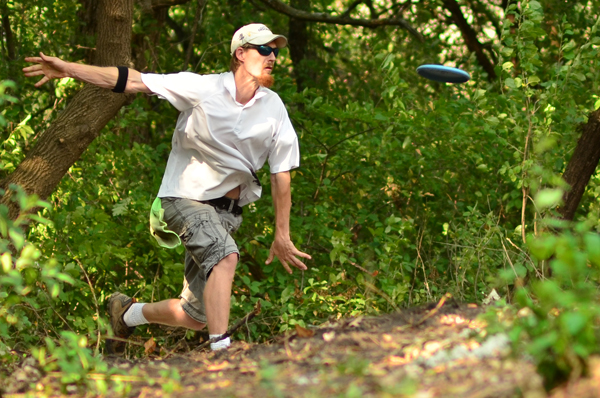 Chris “Cookie” Cook tees off on an extra-long safari hole, which played from tee No. 15 to basket No. 18. Safari means to play a hole or a course differently than its normal design. --Buck Monson/Albert Lea Tribune

There were around 40 disc golfers at the new Oak Island Disc Golf Course on Saturday and Sunday. Competitors came from Nebraska, South Dakota, North Dakota, Iowa, Wisconsin and Minnesota to christen the course with a sanctioned PDGA tournament.

Course designer and tournament director, Ross Brandt, was excited about the turnout.

“I am really happy that Albert Lea finally got to see a great event, a disc golf event, where it’s brought in people and revenue from all over the Midwest,” said Brandt.

Most of the out of town disc golfers arrived in Albert Lea on Friday and stayed through completion of the event on Sunday evening, bringing some revenue to the city through one of the fastest growing sports in America. 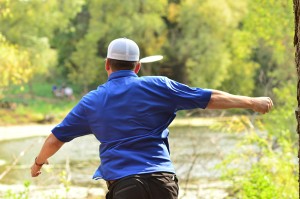 Chris “Critter” Meyers powers his approach shot over the water on the final hole of the tournament.

“This is how I envisioned it, and that’s how I proposed it to the city,” Brandt said. “I told them that this course will bring in people from all over the place. I was a little scared that it wasn’t going to, but when it did, then I was like, OK, well, I did my job, I got people here. That’s a lot of money for the city.”

Saturday there was two rounds of disc golf for all participants, which were separated by a lunch break. The third round of play was on Sunday morning, followed by a special 9-hole final four, which used the entire length of the course using a couple safari holes, which are holes that use a tee pad of one hole and play to the basket of another. The finale consisted of the top-four throwers in the men’s pro division.

The final round saw Ross Brandt (161), Chris Meyers (168), Chris Cook (170), and Riley Brenner (171) facing off to see who would be crowned champion of the inaugural Minnesota Vibram Championship presented by TeeBoxx.

Brandt kept his opponents from digging in at his lead with very solid play, which saw the other three throwers battling for second, third, and fourth early on.

Meyers scored a six on the third hole which allowed both Cook and Brenner to pass him for a tie for second. After a couple of rough holes for Cook and Brenner, Meyers earned the second spot back and held on with a strong finish to get the $420 second-place prize with a score of 204.

“This course is tough,” said Meyers, who has played disc golf for 15 plus years. “Not really like any other courses in the state, where a 54 is a good score. Usually a 49 is a good score. It’s a good thing we have Ross Brandt down here to put an emphasis on a good quality course, teaching the locals what to do, what not to do.”

“After all of the hard work that Dave Sime and Joe Beauseigneur put in, I was glad that they got to play in the tournament, too,” Brandt added.

Since this tournament was also the final stop on the Vibram Sponsorship Series, they announced the winner at the conclusion of the event. Going all the way down to the final four, Brenner overtook Cook for the $500 prize and sponsorship by Vibram for 2013.

There was also a players party held on Saturday night which had a $100 putting contest won by Jason Redding, who also won the $500 TV. Both prizes were provided by TeeBoxx.

J&H Planning Consultants also donated $100 to the first ace of the tournament, which was won by Brandon Day of Fridley during the second round of play on Saturday.