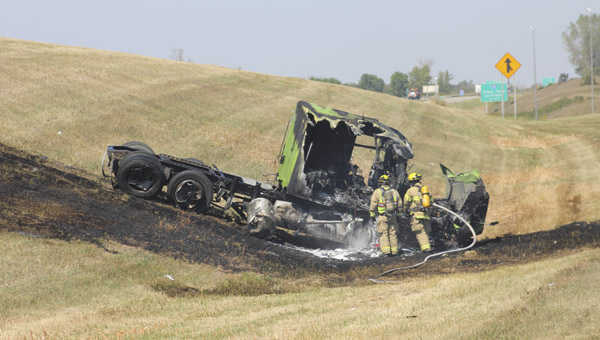 Albert Lea firefighters douse a fire at the tractor of a tractor-trailer that on Wednesday left the northbound Interstate 35 overpass over East Main Street and ended up in a ditch.

A semi truck pulling a trailer of what appears to be sand and dirt went over the guardrail on the northbound Interstate 35 overpass over East Main Street near Love’s truck stop in Albert Lea. 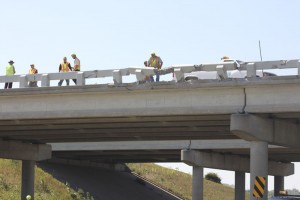 No one was injured, according to the Minnesota State Patrol, and the trailer became separated from the tractor. The driver was James A. Hoppe, 39, of Delavan.

The State Patrol incident report states the 2005 Freightliner semi blew a tire and was “hung over the bridge” and a fire started. The tractor ended up in a ditch between the northbound lanes and the Exit 11 northbound onramp. The tractor was completely burned, and it sparked a grass fire on a hill along the edge of the freeway’s northbound lanes. The trailer landed upside down along the side of the overpass near evergreen trees.

The crash happened shortly after 1 p.m. 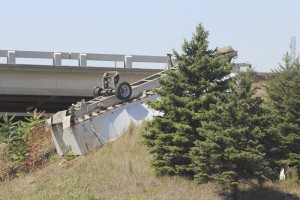 A semitrailer rests upside down Wednesday along the side of northbound Interstate 35.

The Minnesota State Patrol, Albert Lea Police Department and Freeborn County Sheriff’s Office assisted the Albert Lea Fire Department at the site of the crash. The State Patrol closed the northbound lanes at Exit 11. Motorists headed north had to drive on Blake Avenue in the Walmart area to get on Exit 12.

Minnesota Department of Transportation officials were on the site to inspect damage to the bridge. MnDOT opened a single northbound lane around 2:30 p.m., and fully opened the freeway around 3:45 p.m.