The mystery of the Albert Lea Graphic

John Lang of Albert Lea recently brought an old newspaper to the Tribune with the thought the readers might be interested in the contents of the 73-year-old four-page Albert Lea Graphic. 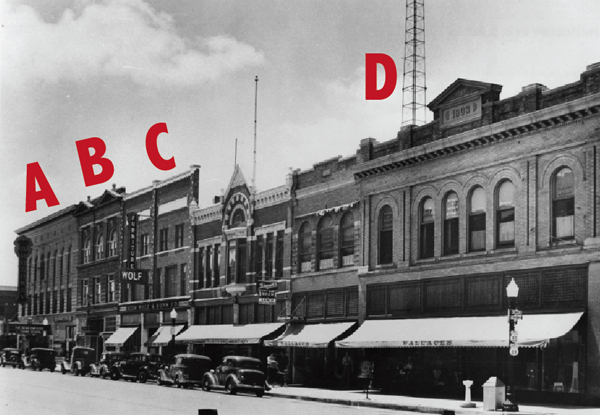 This publication, labeled as “Freeborn County’s only photo-graphic advertiser” was dated November 1939.

The front page contained photos and short bits of information about six local men and one woman, plus what the editor called the “Junior Chamberites.” (In reality this was the Junior Chamber of Commerce, now known as the Jaycees.) However, the second and third pages were focused on the city’s then new radio station, KATE.

Fay G. Child, the Graphic’s editor-publisher, devoted the entire second page to a partial pictorial review of KATE, which had been broadcasting for 25 months. On this page were photos of the station’s owner and general manager, E.L. Hayek; Warner C. Tideman, commercial manager; Herbert E. Nelson, Austin manager; plus 17 staff members. (Hayek at this time was also owner of Trades Publishing Co. and the city’s mayor.)

Also on this page were photos based on some of the entertainment being broadcast. They included Skipper Berg and the Viking Accordion Band, the Scandinavian Accordion Band, both of Albert Lea, and Ray Stolzenberg and the Northern Playboys of Austin, “Grandpa Hawkins,” and a group known as “Schwen’s Kiddy Circus.”

KATE Radio went on the air in September 1937. By 1939 the station’s offices and studio were located at 332 S. Broadway Ave., in the building next to the Broadway Theater on the upper floor. The transmitter tower was located behind the building and across the alley. This station also had offices and a studio in Austin and was considered to be the radio voice of both cities. (The Austin operations ceased in May 1948 when KAUS Radio went on the air.)

The third page of this publication had the weekly broadcasting schedule for KATE. The fall of 1939 this station started broadcasting at 8 a.m. on Sundays and 6 a.m. on weekdays. The programming ended at midnight on all seven days.

Shown is the masthead of the Albert Lea Graphic. This issue published in November 1939, as Vol. 1 No.7.

The station’s program schedule covered a multitude of themes back in 1939. There were newscasts based on local, national and international events, plus weather forecasts. Music was based on local and area talent and a wide variety of melodies ranging from ethnic (old time) to popular (Tin Pan Alley and Hollywood) to classical compositions. Also in the mix were children’s programs (like Captain Midnight) and several broadcasts originating at churches in Albert Lea and Austin.

Also on the weekly schedule were two daily broadcasts based on requests from listeners for specific tunes to be played as a special salute or surprise for other folks observing birthdays, weddings, anniversaries or just for the heck of it.

A series of programs were based on remote broadcasts from Austin’s Terp Ballroom on Sunday, Wednesday, Friday and Saturday evenings. Music for these broadcasts was furnished by the band or orchestra playing at the ballroom that particular evening.

Seasonal sports was also a part of the station’s schedule with remote broadcasts for area football games played on Friday evenings and Saturday afternoons.

The fourth page of what could now be considered as a local mystery publication had an ad for the Mier Wolf & Sons. This store was then located at 326-328 S. Broadway Ave, and next door to KATE. The ad said Mier Wolf was “Southern Minnesota’s largest furniture store.” And one part of the store, as stressed by this ad, had a interior corner called the radio department. The ad highlighted six tube-type radios ranging in price from $20 to $69.95.

Very little information seems to be now available about the Albert Lea Graphic which started publication in May 1939 and was reportedly “distributed to 5,200 families in Freeborn County.” Two questions contributing to the mystery are certainly based on how long the Graphic lasted and where it was published.

Very little information is known about Child, the Graphic’s editor and publisher. The 1940 census shows he lived on Virginia Place and his occupation listed as printer/ publisher. According to Linda Evenson, librarian at the Freeborn County Historical Museum, he died during 1965 in Ramsey County.