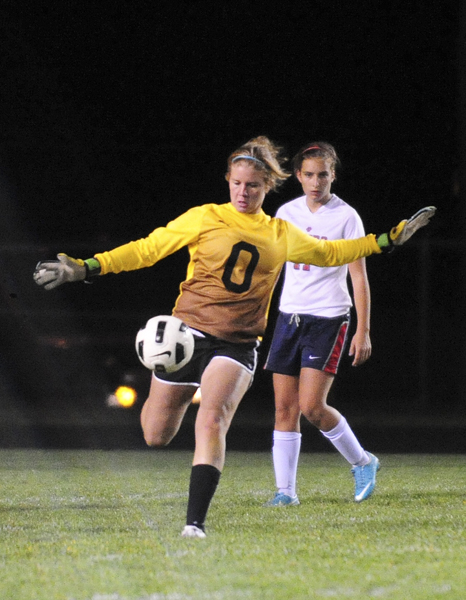 Tigers’ goalie Hanna DeVries kicks the ball away from the goal during the second half of the home game against Rochester Century on Thursday. -- Brandi Hagen/Albert Lea Tribune

Thirty-two minutes into Thursday’s game, a pass from Megan Kortan to Gretta Johnson followed by a kick by Becca Dup was the Tigers’ golden ticket to a 1-1 tie with Rochester Century.

The tie was the first time in 15 years that the Panthers did not beat the Tigers.

“If we would have won, I would have called it a miracle,” Tigers head coach Rick Barnhill said. “With a draw, I’ll call it a minor miracle.”

Century scored in the second half of the game with 12 minutes, 40 seconds remaining on the clock. The Tigers held their ground until the time ran out forcing the game into overtime.

The Panthers had a goal attempt in the first half of overtime that was deflected and blocked by Albert Lea’s goalkeeper, Hanna DeVries.

“Hanna was absolutely marvelous tonight,” Barnhill said. “She’s been steady all year long and made some big saves for us tonight. I told the team before we went out for overtime, ‘we need to do this for one person and that’s Hanna. She provided us a chance to get the result that we did.’”

Barnhill said in the second half of the game, the Tigers’ formation was switched to put more numbers in the back for protection.

“I had to do it,” Barnhill said. “I knew Century was going to come to life in the second half. Everyone could see how fast and skilled they were, and they came at us hard.”

The change in formation seemed less effective, but who knows if the other formation would have worked either.

For overtime, the team went back to its original plan and kept pushing to keep its goal.

“We weren’t just trying to hold on, but at some point you have to be aware of the clock and time management,” Barnhill said. “You have to look at situations and see what’s in our best interest.”

The game ended in a draw and Barnhill couldn’t be happier.

“It’s the best result,” Barnhill said. “This team came away with something they can take away as a positive.”

To show just how strong Century can be, Barnhill referenced the Panthers’ game against a Class AAAA school, Mahtomedi, who also only was able to score once.

“How do you expect to score more than these mega schools?” Barnhill said.

The Tigers have three more games to play before sections, but Barnhill hopes Thursday’s game was motivation to get there.

“Maybe we can be the spoiler this time around,” he said.