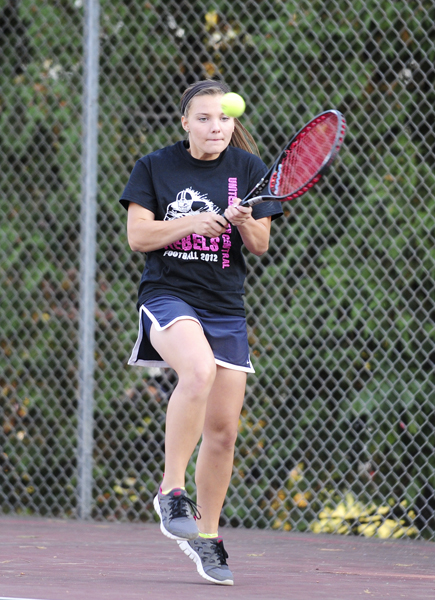 “I’m pretty pleased with our season,” Rebels head coach Jill Bailey said. “We had a couple hiccups early and learned from that. Now we’ve got the mentality that the team loves to win so that’s what we try to do every time we go out on the court.”

All four of the Rebel singles teams were victorious including Claire Christian, Linsey Thisius, Julia Stenzel and Ali Wood.

Bailey said Christian did a good job of keeping the ball deep, moving her feet and serving. After a close first set, she was pleased with how smart Thisius played. She figured out how to wait for the right opportunities.

Bailey said Wood had a good night of placing the ball and Stenzel was ultra consistent.

“Julia is just a machine,” Bailey said. “If there’s a job that needs to be done on the court, we turn to Julia. She’ll make it happen.”

Bailey said Bye and Legred are becoming more aggressive at the net as they play their second year together.

Bailey said the tournament is a big deal because it is where All-Conference honors will be finalized.

“It’s a chance for the girls to set themselves apart from the rest,”Bailey said.