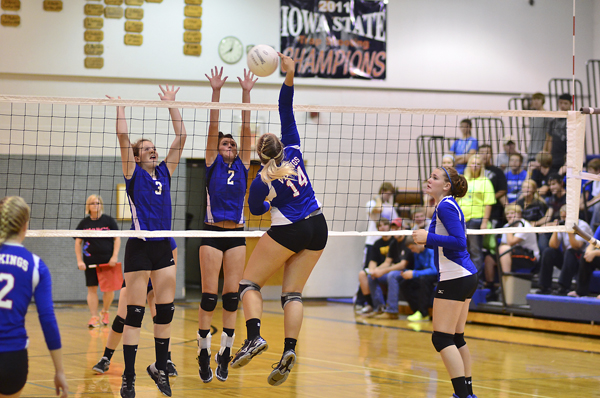 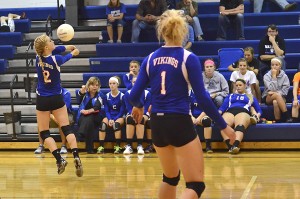 Northwood-Kensett's Chandler Capitani makes a big save in their match against Rockford on Tuesday night. -- Buck Monson/Albert Lea Tribune

The crowd was energized as the teams put on a great show going back and forth on points and games throughout the night. The home crowd was led by a mysterious whistler, who led the chants during the timeouts late in the match.

“Rockford is a good team and they know the court,” said Vikings head coach Bess Eilertson. “They have a couple of really good hitters. It’s always fun to go up against them. They are a good team to play, and we really like to play with them.”

Statistically, the Vikings were led by freshman Hattie Davidson who had 17 kills and 11 digs. Junior Chandler Capitani also put on a performance with 11 kills and 27 digs. 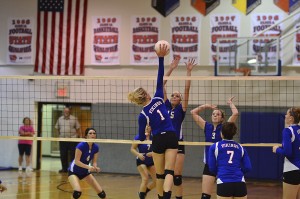 Northwood-Kensett's freshman, Hattie Davidson, with one of her 17 kills against Rockford on Tuesday night.

The stats don’t tell the entire story though, as the Vikings played very well as a team. Sophomore Shelby Hagen had big blocks in game four, while junior Abigail Wahl had solid serves in game five to help the Vikings with a seven-point run. In that run, Capitani had three kills.

As far as passing went, Eilertson said the Vikings improved as the night progressed.

“Our first couple games were really shaky,” Eilertson said. “We finally got that together and dug deep.”

The two teams were about as closely matched as they could get on the night with the Vikings outscoring the Warriors 105-103 overall.

“This is my fourth year in this, and the other three years when we took it to game five, we always lost to Rockford,” Eilertson said. “Kind of cool, it’s my birthday tomorrow and they told me this was my birthday gift. I’ll take it.”