Why is it that birds choose to migrate at nighttime?

“Everything is nearly copacetic. I missed church and ran into the pastor at the café Monday morning. He wanted to give me hell, but he couldn’t. He’s a man of the cloth. I told him that I had corn to put into the bin. I figured it was better to sit in a combine thinking about God than to sit in church thinking about corn. Remember Dooley? He farmed and was a drooler at the post office until he was laid-off when the stamps became self-adhesive. He also was a part-time lifeguard at the pool.

“That’s why he worked only parttime. Dooley knew his cars. He could look at any car and say, ‘That’s a car.’ I saw Dooley the other day with a stunning young woman who he introduced as his wife. She stared at him as if he’d hung the moon. When she went to powder her nose, I asked him how old she was. He told me that she was 25. Dooley’s 70. I asked how he’d managed to land a trophy wife. He told me that he’d lied about his age.” 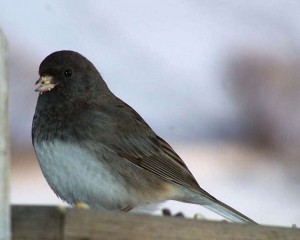 Photo of a dark-eyed junco by Al Batt.

Deadline-driven and unable to sleep, I stepped outside into the darkness surrounding the deck of my house. It was quiet. Not too quiet, but the harvest was taking a break and the large farm machines were silent. It was quiet enough that I could hear what sounded like a group of spring peepers flying overhead. That would have been unlikely as the spring peeper is a frog and would need a ticket to fly. What I was hearing were Swainson’s thrushes in migration. Researchers have determined that birds migrate at altitudes typically ranging from 1,500 to 5,000 feet. Why do they migrate at night? No human knows for certain, but here are some suppositions. Hawks are more active during the day. The weather is often less turbulent at night, making flight easier. Cooler air temperatures are advantageous as flying generates considerable heat. It’s easier for the traveling birds to find food during the day. They are able to spend some daylight hours in prime foraging areas, replacing the calories they had burned in flight.

I spotted a junco in my yard early one morning. The junco looks wintry. It is called a snowbird because it has a gray topside the color of winter’s clouds and is white like snow underneath. My father said that snow arrives six weeks after the snowbird. I hope the snowbird was misguided as I saw it on Sept. 18.

“One night, we found a hummingbird just sitting on the feeder and I thought it was dead. My 8-year-old grandson said it was alive. He peeled it off the feeder, and it made a little chirping noise. It sat in his hand for about 10 seconds then took off. Was it sick or cold?” Hummingbirds rapidly lose body heat to their surroundings and have huge metabolic demands that must be met to survive a cold night. To meet this challenge, hummingbirds lower their internal thermostat at night. This reduced physiological state is called torpor. Torpor is a type of deep sleep in which a hummingbird lowers its metabolic rate. Its body temperature and heart and respiration rates get so low that the bird appears lifeless. The warmth of the day allows the bird to regain consciousness slowly. A hummingbird has to warm up its tiny body the moment it awakens. It does this by making its muscles contract and release. In other words, it shivers.

“How long are a pelican’s wings?” An American white pelican has a wingspan of 8 to 9 1/2 feet.

“Why does a phalarope spin in the water?” A phalarope spins on the water’s surface by kicking one leg harder than the other. This action forces water away from the bird on the surface, causing upward currents. This ascendant flow pulls tiny animals upon which the phalarope feeds to a place where the bird could reach them.

The Effigy Mounds National Monument is located in northeast Iowa near McGregor and Marquette. This region is a driftless area. That means it was untouched by glaciers during the Ice Age. Harry Truman set it aside as a national monument with a presidential proclamation. The effigies were created by Native Americans (Mound Builders) who cleared an area before using clamshells to outline the shape of a turtle, bear, eagle, bison, lizards, deer, lynx or falcons. The Great Bear Mound at Effigy Mounds is 70 feet wide, 137 feet long, and 3 1/2 feet high. Soil was used to create the mounds that were used for ceremonial and sacred purposes. Effigy Mounds has 31 effigy mounds.

The visual acuity of a hawk is likely three times that of a human.

The Asian needle ant doesn’t just show other ants where a food source is. It carries or drags its sisters to the location.

While pheasant counts are up over last year, they are still 51 percent below the 10-year average.

Richard Nixon is not frequently thought of as an environmentalist. However, his presidential signature made law of some of the most important environmental legislation in U.S. history. In 1970, Nixon signed the Clean Air Act and created the Environmental Protection Agency. In 1972, the Marine Mammal Protection Act, the Federal Insecticide, Fungide and Rodenticide Act, and the Toxic Substances Control Act passed. The Endangered Species Act passed in 1973 and the Safe Drinking Water Act in 1974.

“Holding on to anger, resentment and hurt only gives you tense muscles, a headache and a sore jaw from clenching your teeth. Forgiveness gives you back the laughter and the lightness in your life.” — Joan Lunden

“There is no single face in nature, because every eye that looks upon it, sees it from its own angle. So every man’s spice-box seasons his own food.” — Zora Neale Hurston