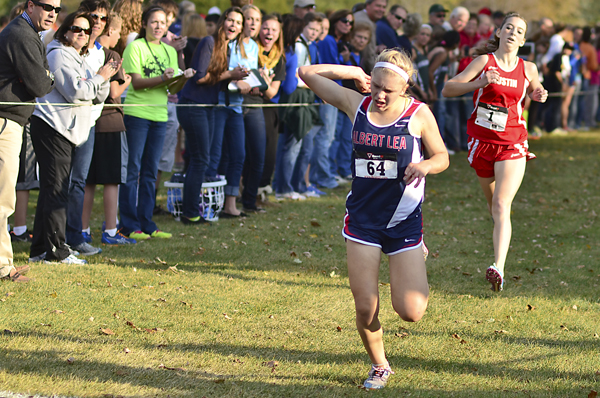 Chrissy Monson tries to raise her hand as she wins the Big 9 Conference title on Tuesday in Owatonna. Monson was in second place coming over the final hill, then used all of her energy to get the win in a sprint to the finish. The girls’ team as a whole secured the Big Nine Conference title. -- Buck Monson/Albert Lea Tribune

The boys’ team finished in a tie for sixth place with Mankato West.

“The boys finished short of our goal by just one place,” said Tigers coach Jim Haney. “We can’t feel too bad about that. We’re very, very happy.”

The boys’ team was led by junior Logan Callahan who finished 23rd. The other six boys competing were all grouped together finishing between 33rd and 46th.

The girls’ team stole the attention on Tuesday though, by winning the Big Nine Conference in a dominating fashion. Not only did Monson win the entire race, but three other Tigers finished in the Top 14, making them First Team All-Conference this year.

Monson was in pace with the leaders for most of the race, but then found herself a ways behind leader, Madison Overby of Austin, coming over the hill and down the final stretch.

Overby has beat Monson in the two previous meets and, also beat her out for first place in last year’s Big Nine meet. In the most recent meet in Austin on Oct. 9, Overby won by finishing 5.5 seconds faster than Monson. Monson overcame Overby in Tuesday’s race by finishing 1.1 seconds faster.

It was a moment that if it wasn’t seen first hand, might not have been believable.

Monson made a sprint to the finish, taking the top spot just before the two reached the finish line. She barely had enough energy to raise her arm as she crossed the line.

“I don’t know where that came from,” Monson said of her final sprint. “That was not me. That was something working inside of me. I’m still in disbelief that that even happened. Everything just came together right at the right time.”

With the win, Monson claimed her third conference title over the last four years.

“She’s a champion,” Haney said. “She proved it today. That was an excellent effort.”

Monson said she is  proud of her team with all of their hard work they put in to acheive the title.

“I finally ran a good time,” said Monson. “But, this time it wasn’t for me. It was all about those girls and I just love them all. They are just like family to me.”

Haney added that it was a great day for Albert Lea cross country.

The Tigers will compete in sections Oct. 25 at the Brooktree Golf Course in Owatonna. From there, the top two teams will advance to the state tournament along with the top eight individuals from non-qualifying teams.

The girls’ hope to improve on their seventh-place finish from last year.

See the Scoreboard for full results.