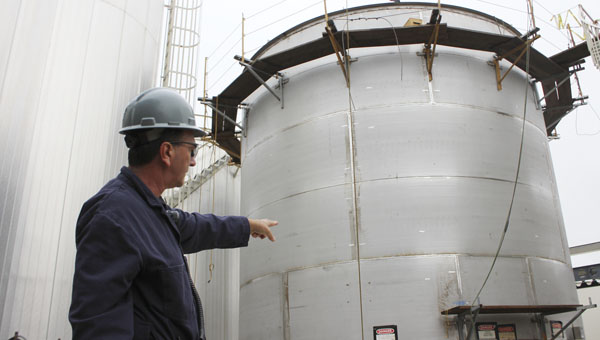 Ken Quinn, environmental health and safety manager, points out parts of a biodiesel fuel tank at the Renewable Energy Group plant near Glenville Friday morning. REG is putting in $20 million worth of upgrades to the facility. -- Trey Mewes/Albert Lea Tribune

GLENVILLE — The local biodiesel industry is getting stronger.

The upgrades will allow the plant to make diesel fuel from low-grade fats, oils and other natural resources that would normally take longer to refine, rather than soybean oil and other types of refined materials.

REG President and CEO Daniel Oh called the upgrade a “major investment” in the plant, the community and a good use of recyclable resources.

“As you’re going up and down the road and buying food … quite frankly, an awful lot of that will end up right here in this facility,” Oh said. “And we’ll turn it back into fuel and send it back out into the community.”

REG bought the biodiesel plant in Glenville last year from SoyMor Biodiesel, LLC. after SoyMor suspended production in 2008 due to high prices for soybean oil. The upgrades will include two 500,000-gallon fuel tanks, a fatty acid stripper, a new gas line, distillation units and more, according to Brad Albin, REG vice president of manufacturing.

“We’ve been planning this for about a year,” he said.

Construction is expected to end sometime next summer around June, according to Albin. 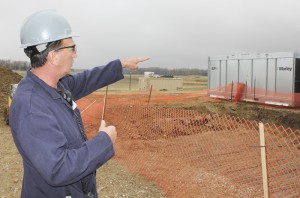 Both Rep. Rich Murray, R-Albert Lea, and Sen. Dan Sparks, DFL-Austin, lauded the group for expanding its operations and for providing more jobs in the community. Aside from the 22 or so plant workers, about 70 to 80 construction workers will work on the project.

“We have 22 jobs in the community that we didn’t have over a year ago now,” Murray said.

The biodiesel industry is slowly growing again thanks to an improving economy and favorable policies. In Minnesota, diesel fuel has to contain at least 5 percent biodiesel, and Gov. Mark Dayton extended existing biofuel mandates for another two years when he signed into law the 2012 Omnibus Agriculture Policy in May.