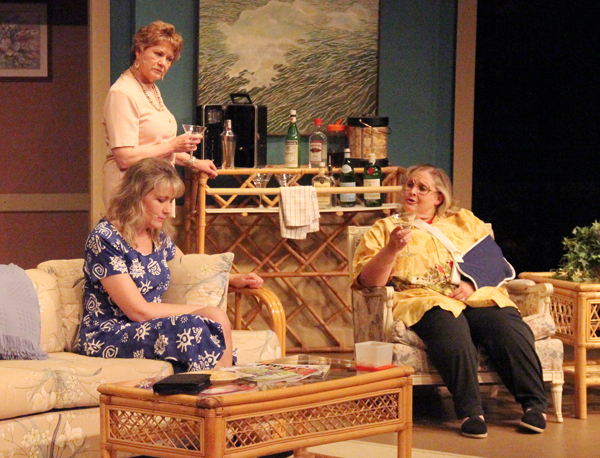 Seated on left is Barb Sekora as Lexie and seated on right is Nancy Lahs as Vernadette. Standing is Rosalie Truax as Dinah. The three women, along with Kris Bartley and Kristan Dye, star in “Dixie Swim Club,” which opens today. --Kelli Lageson/Albert Lea Tribune

Albert Leans will have the chance to follow the emotional, and hilarious, journey of five college friends in an upcoming play. 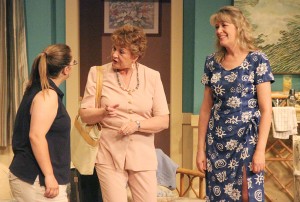 Rosalie Truax, middle as Dinah, speaks to Kris Bartley, left as Sheree, as Barb Sekora, right as Lexie, listens on during a dress rehearsal for “Dixie Swim Club.”

Albert Lea Community Theatre presents “Dixie Swim Club,” a comedy that follows five women who became friends while swimming together in college. The friends meet every summer to reconnect, and the audience will see them at ages 44, 49, 54 and 73.

The cast is made up of just five women including Kris Bartley as Sheree, Nancy Lahs as Vernadette, Kristan Dye as Jeri Neal, Barb Sekora as Lexie and Rosalie Truax as Dinah.

Parsons said rehearsals have been fun with such a small cast. He’s also encouraged collaboration from the actors on things like where characters move on the stage.

“I try to include the cast — it’s been a real collaboration,” Parsons said.

The show runs about one and a half hours, with a 15-minute intermission. The intermission precedes the most dramatic change in the characters as they jump from age 54 to 73. The setting is the same vacation home throughout the show where the women meet each year in North Carolina.

How much: Tickets are $15 for adults and $10 for students