The funeral service for Burnette Caroline Grunhovd will be at 1:30 p.m. Friday at Bonnerup Funeral Service in Albert Lea. The Rev. Todd Walsh will officiate. Burial will be in Graceland Cemetery. Visitation will be held from noon until the time of the service. 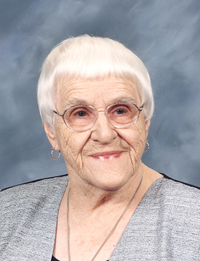 Burnette was born on March 22, 1917, in Worth County, Iowa. The daughter of John E and Bolette (Haugsdal) Knutson, she was baptized and confirmed in Emmons Lutheran Church in Emmons and attended rural school south of town.

On Dec. 1, 1937, Burnette was united in marriage with George Walter Grunhovd. They were blessed by a son, Gerald Dean on April 8, 1939. They were members of Grace Lutheran Church where Burnette had been active with quilting.

Burnette worked for Land O’ Lakes for 13 years, volunteered for SEMCAC and had been a member of Sons of Norway for 21 years.

She was preceded in death by her parents; husband, George in 1986; son, Gerald in 2001; one grandson in infancy; twin sister, Bernice Jennette; sisters Alma Herfendal and Mabel Erdahl; brothers: Eddie, Roy and Albert; and sisters-in-law: Clarine Knutson, Myrtle Knutson and Dorris Knutson.