Memorial services for Charlotte E. Nelson, 94, of Albert Lea, formerly of Clarks Grove, will be at 2 p.m. Nov. 15 at the First Presbyterian Church.  The Rev. Dwight Netzer will officiate. Interment will be in the Clarks Grove Cemetery. Online condolences are welcome at www.bayviewfuneral.com. 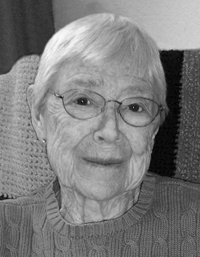 Charlotte Emma Nelson was born on Feb. 5, 1918, in Pickerel Lake Township, the daughter of William and Ella Mae (Kuehl) Schmidt. She attended school at Hopkins (District 55) and graduated from Albert Lea High School in 1936. Charlotte was baptized and confirmed at First Presbyterian Church in Albert Lea and was there united in marriage to Phillip J. Nelson on June 25, 1940. They lived and worked together raising their family on their farm south of Clarks Grove. Charlotte was an active member of the Clarks Grove Baptist Church, where she taught Sunday and Bible school. She worked at Lea College for five years, and after moving off the farm to Knutson Place, she contributed many hours of volunteer work, knitting caps for babies at Naeve Hospital, and manning the desk for St. John’s Lutheran Home.

Charlotte enjoyed gardening and canning the produce. She loved to cook and bake and entertain family and friends. She worked on all sorts of crafts and was an expert seamstress, designing and sewing wedding gowns for both her daughters and their bridesmaids. She also enjoyed traveling throughout the United States and Europe. Many trips were taken with Phil in their private airplane. In retirement, they spent the winters at their home in Mesa, Ariz., enjoying many rounds of golf. Charlotte was a wonderful mother and was especially fond of the time she was able to spend with her children, grandchildren and great-grandchildren.

Charlotte was preceded in death by her parents; her husband Phillip; her sister Lucille Ladwig; and her brothers Donald and Marvin Schmidt.

For the past several years Charlotte enjoyed living at Knutson Place, and later St. John’s Lutheran Home where she was lovingly cared for by the staff.